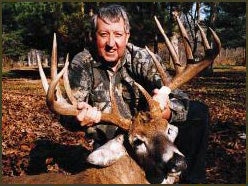 This is a tough week. With so much going on in the woods, it’s hard to decide how and where to hunt. The rut is still ripe in most places. You might spot a shooter wandering around or dogging a doe. You might not see squat, because many of the big boys have become as nocturnal as vampires. Many are holed up and servicing does in thickets, to boot. You might see or hear a herd of deer running wildly over hill and dale. Gun season is on in many areas; other guys kill some bucks and scare the daylights out of many more. All things considered, it’s best to go find a funnel and sit tight.

Study an aerial map and find a hidden spot where two or three ridges and draws converge, maybe in a creek or river bottom. The place has to be thick and rough-the kind of place deer run to and other hunters don’t want to deal with. Ideally, a few doe trails will run off the ridges and drop down into the area. This is perfect, because the “hunt-the-does” strategy applies now.

A narrow ridge covered with heavy brush is an awesome spot for a bow stand. If you hunt with a shotgun or rifle, set up where you can watch a draw from above. Hunt as high as the terrain and cover allow. You’ll see more from a high vantage point, and the wind and thermals should be fairly steady up near the top of a ridge.

Get on post early each morning, and hunt long and hard. You might spot some does sneaking down a ridge with a buck hot on their heels. Watch for a buck popping over a ridge, shortcutting from one draw to the next. Glass into thickets for a bedded doe; look around her for a big-racked mate. Look and listen for deer pushed by other hunters. When they’re spooked they’re apt to roll in over a ridge and dive into a draw for cover. You never know what might happen. But if you hunt the setup all week you will certainly see some deer.