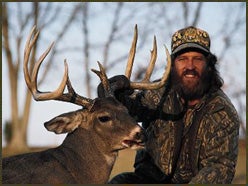 It’s funny how things come full circle. Last month we advised you to look for hogbacks, draws, strips of timber and the like where bucks scraped like fiends as they prowled toward food sources and scent-checked for does during the last week of October.

Now, exactly one month later, go back and check those spots again in hopes of running across an old 8- or 10-pointer cruising for the last estrous does. There is scientific evidence for doing so. A University of Georgia study a few years ago found that when bucks start chasing and breeding does in mid- November, they virtually stop checking scrapes. But along about November 20, some bucks go back to checking old scrapes in their core areas, and they keep it up through the first week of December. The older bucks know from experience that the does that were not impregnated during the November peak-breeding phase will reenter estrus. They just don’t know exactly when this will happen, so they keep checking scrapes, waiting for the remaining does to be ready to breed once again. This phase won’t come until 28 days after the does originally came into estrus (usually a week or so into December).

There are a couple of caveats. Many of the bucks have been tagged and the survivors are wary and nocturnal now. As a result, you won’t see nearly as many bucks cruising around as you did back in late October. But it only takes one!

Also, it’s Thanksgiving, one of the most heavily hunted weeks of the year in many places. Poke around and find a spot where nobody else is hunting. That might be a ridge near a cornfield you bowhunted on back in October, or a scraped-up draw where you moved in on a buck the first week of this month. Keep your options open.

When hunting in the morning, set up in a funnel, near thick bedding cover. Watch for freshened scrapes-sign that a buck is still in the area. With the moon dark this week, some deer should move in and around thickets as day begins to break.

In the afternoons, sneak as close to small, out-of-the-way bedding areas as you dare and watch trails that lead to late-season food sources, especially if the trails move through thick cover and have scrapes along them. Bucks and does are tired, thin and hungry. They should be bedding as close to food sources as they can. They’ll hit the feed before dark if the pressure isn’t too heavy. You might finally tag Mr. Big. It’s been a long eight weeks, but, man, what fun.