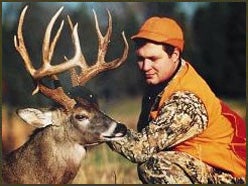 A few months ago I summarized a University of Georgia research project that monitored the scraping behavior of whitetails [BRACKET “Whitetails, August”]. The study determined that some of the heaviest scraping of the pre-rut occurs just after dusk each day. Now is the time to use that intel.

As bucks get up and paw to vent weeks of pent-up energy and sexual frustration, they create the most sign near their bedding areas and en route to food sources where they’ll scent-check does. Look for a hogback ridge, narrow strip of timber or similar funnel that connects a bedding area with a grain field or oak flat where you’ve spotted a lot of does. The best funnel will have a couple of trampled doe trails, a bunch of fresh scrapes and some big rubs. A six-pointer or a 150-inch brute might have made those scrapes, but only a deer with a powerful neck and a big rack can maul trees as thick as your calf.

To catch a shooter on a ridge or in a draw during the last wisps of light, hunt 50 to 100 yards off the feed and back toward a bedding cover. If you find a long line of scrapes and figure ol’ Mossyhorns is traveling a good distance between bed and feed, probe 50 to 100 yards deeper into the woods. The bucks are more aggressive now. You should be too. When you find a midway point in a funnel, you’ll still have a dilemma: Should you set your stand close to a scrape line on a doe trail or downwind of it? I have sat and watched many good bucks prowl down a doe trail like they owned it, but I have also seen wary giants loop through cover as far as 50 to 100 yards downwind of scrapes, scent-checking them before circling up the trail. I figure it’s best to set up 75 to 100 yards downwind of a trail or scrape line and hope a big deer circles into bow range. At least he won’t come in from behind and bust you from the get-go. If you spot a buck or two on a trail or scrape line a couple of evenings in a row, you can always move your stand in closer.

Up until now the best hunting has been in the afternoons. But the deeper into October you go, the hotter the mornings get. If on or around Halloween you can play the wind and slip into a hollow or onto a ridge blazed with hot sign, go for it. Sneak to your stand well before first light.

If it’s cool-say, in the 20s or 30s-there’s a good chance you’ll spot a buck prowling around, trying to find a hot doe. If you don’t see him or don’t get a shot, don’t sweat it. There’s always next month, when the rut really rocks.