Try these four ways to up your odds the next time you hunt turkeys in treeless terrain. 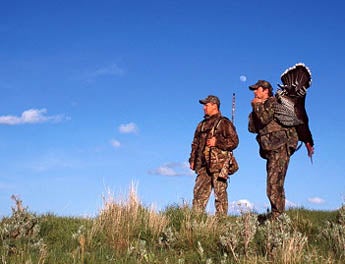 We arrived at Stasney’s Cook Ranch on a windy morning. I climbed out of the truck to stretch my legs, cramped from the long drive west from Dallas. Our host was a smiling, leathery cowboy festooned in a broad-brimmed hat and Wrangler jeans tucked into knee-high boots. As he greeted my hunting partner, I read his name off the back of his wide belt: Johnny.

While the others chatted, I scanned the vast landscape. I was surprised at how exposed everything was. The rolling hills glowed green with spring grass. Prickly pear and the budding skeletons of mesquite and scrub oak were scattered in every direction. There wasn’t a tree taller than a basketball hoop. I could not imagine a turkey inhabiting this barren terrain.

“Is this where we’ll be hunting?” I finally asked our host.

“There’s not a tree here big enough for a turkey to roost in,” I said.

Johnny’s grin sprang back to his face. “I’d love to have a nickel for every Easterner who’s said that,” he said and led us into the ranch house.

The hunt at Stasney’s gave me my first taste of open-country turkey hunting. The first morning, my guide had me set up on a grassy hillside overlooking a green field where toms liked to strut. Feeling exposed, I moved up the hill 20 yards to a clump of brush that offered more cover. As I plopped down, four Rio Grande turkeys flushed from the top of a woody shrub less than 10 feet high. None of the branches were more than 3 inches thick.

You’d never find a turkey roosting in such a small tree back East. Meanwhile, my friend killed a nice tom that had roosted on a telephone pole. Since that hunt, I’ve enjoyed a number of open-country hunts. Here’s what I’ve learned.

**1. Lighten Up on Camo **
Most camouflage patterns are too dark to match open terrain. I have giant plastic tubs full of clothing printed with the woodland-patterned camouflage of Realtree, Mossy Oak and others. They’re great for hunting Eastern forests, but you’ll stand out like a nudist in church if you wear them among cheatgrass and broken shale. Moreover, snow during turkey season is a real possibility in much of the West.

We wore a pattern called Desert Shadow that is made by David’s company. I have photos of us on that trip, and I almost have trouble finding myself in some of the pictures; the turkeys had similar problems. The lighter camo pattern has worked well for me on open-country gobblers from Nebraska to New Mexico.

2. Choke Up
At home in Iowa, I rarely have to take shots on turkeys beyond 35 or 40 yards. There, I like a standard full choke with conventional lead turkey loads. But open country might require you to stretch it a little, as long as you can do so reliably.

On a recent Texas hunt I used Federal’s Mag-Shok 3-inch loads, which employ Federal’s Heavyweight tungsten-alloy shot and Flitecontrol wads. I shot these through an extra-full turkey tube in my Benelli M1 and broke turkey necks authoritatively from nearly half a city block away. (Incidentally, after extensive pattern testing, I’ve stopped using 3½-inch ammo. Despite the additional pellets, it doesn’t seem to pattern as evenly in my shotgun as 3-inch loads.)

Of course, all of this firepower is of no use if you don’t spend time at the range. Long shots make it imperative that your shotgun is centering its patterns on point-of-aim, so the densest part of your pattern arrives at the turkey’s neck. If your shotgun has adjustable sights (most modern turkey guns do), you may need to adjust them. Even then, it’s probably a good idea not to stretch shots farrther than 45 or 50 yards. Pellets begin losing a lot of energy beyond that distance.

[pagebreak] **3. Extend Your Vision **
To succeed in open terrain, you need to think at a scale appropriate to the land. In the most open Eastern hardwoods, the distance at which you can spot game is little more than 200 yards; quite often it is much less. Out West, be mindful of the possibilities at greater distances. I’ve spotted turkeys from more than a mile away in open country and spooked them from a quarter mile. Consequently, I won’t hunt turkeys in open country without a good binocular.

Though optics are rarely considered turkey-hunting tools, pursuing toms in open country can feel like going after sheep or mule deer. In many cases, I keep my calls and decoys in my vest and begin hunting by glassing from a high vantage point. Then I make a move on birds I’ve spotted.

Choose the best roof-prism glasses you can afford. Two I like, in different price categories, are the Leupold Wind River Cascade 8×42 and the more expensive Kahles 10×42. Good binos let you size up a flock of turkeys from a great distance and decide whether it includes any longbeards worth pursuing. That can save you a lot of time in the field.

**4. Use the Wind **
In open country, serious wind often comes with the territory, but don’t worry about it here-the wind is your friend in expansive terrain. Unlike Eastern woodlands, where a hunter tends to rely more on hearing a turkey gobble than seeing it, exposed hillsides and prairies allow you to spot turkeys from far away and make a stalk. Wind covers the noise of your approach, so all you need to concern yourself with is using the contours of the terrain to avoid being seen. Stay low as you move, set up beneath a ridge near the gobbler and begin calling.

On a recent Western hunt I killed two large Rio Grande gobblers in a single day-one at 11 a.m., the other at 2 p.m.-by stalking them on open hillsides in the wind. I used natural terrain breaks, brush piles and clumps of cactus to conceal my approach and even crawled on my belly at one point.

Once you put the sneak on a longbeard across an open prairie, or hear his gobble thunder off the rocks of a canyon, the woods back home may begin to feel confining.