All dogs 8 to 12 weeks old are cooperative enough for this plan... 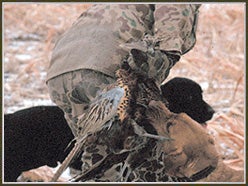 Maybe you found that eager-to-please pup we discussed last month. Or maybe your new pup is still to come. Either way, and whatever the breed, training (age 8 to 16 weeks) begins almost upon the pup’s arrival.

The first step is name recognition-speed training at its swiftest and the basis for everything that follows.

Decide upon a name and be prepared with meat scraps or pieces of hot dog while the pup romps around the lawn. When the pup looks your way, kneel down and call the name. Dogs inviting play will bow with their heads and front ends low and their rumps high. A human kneeling to dog level is similar enough, and the pup will come running. Meet him with the treat and praise. I’ve had pups learn their names after just one such invitation and reward. But repeat it several times to guarantee the neuron connection.

The next day, call his name and add the word “come” as you kneel. You may think the extra action word is unnecessary-he’s already coming to just his name. But that’s the whole point. It’s vastly easier and quicker to link the word with an existing pleasant action than to first introduce a word that’s meaningless to the pup and then try to convince him that he should do something when he hears it. And soon, other words behind his name will link to other actions.

Repeat “come” training with brief pauses three or four times daily for perhaps three days. After that, before calling the pup, drag a two- or three-foot trail with the treat. Drop it at the far end. This time, as the pup comes running, meet his nose with the fingers that held the goodie. In a smooth action with the moving pup, bring your fingers down to the trail’s near end. The nose will follow. When it reaches the trail, jerk your hand away, leaving the nose smelling scent in the grass. Most pups will follow the trail to the far end where you’ve left the treat, especially if you’ve arranged for the pup to be working into the wind. If he does wander off scent, gently guide him back.

As the pup becomes more proficient at this (in a week or so of a couple of trails daily), you can lengthen trails, run them with the wind and add twists and turns. We didn’t name this action for the pup early on because speaking might have interrupted concentration on scent, but now say, “Find it,” as your fingers lead nose to ground.

Later, this word/action association will command your pointer to search for a dead bird or help your hound start a trail where you know an animal ran.

Also, we’ve accomplished the crucial business of awakening the pup’s nose. There’s a world of difference between a dog with a good nose and one that also had early experience that taught the importance of using it well.

What happens next depends upon breed. If it’s a beagle, I’ll get elaborate with trails. And I’ll switch to bottled scent on a pad, which I then cast with a fishing rod to eliminate my scent from the trail. A somewhat scented treat will be at trail’s end.

Coonhounds can be different. I tried a bottled-scent trail on one pup only, but her hackles rose, she gave voice and she arrived at the end in a flash…only to be visibly disappointed. She had expected action-a live challenge, not inanimate food. Coon scent inspired little interest after that. A better way is to scent an old coon hide and let the pup, or a whole litter, run behind, biting and fighting the hide as you drag it along with a rope. Then rub its scent on a tree, throw the rope over a limb and pull it above their heads. Jerk and jiggle it to inspire jumping and barking.

I continue relatively simple trails for retriever or pointer pups. For all breeds, I bake liver slices, tear them into small pieces, toss a handful across the lawn, bring the pups around and say, “Find it!” They search diligently. While bottled scents, which only approximate the real thing, can help pups of some breeds find thingss, don’t expect a pointer pup to lock up on scented rags. You need live birds by the time the pup is 12 weeks at most.

Most houndsmen do little obedience training because hounds hunt independently. Pointers and retrievers work under our control, so their next step is heeling. Simply hold a treat above the little pup’s nose and walk off. As the pup automatically follows the scent, say, “Heel!” A few feet later, give the reward. Don’t stretch the distance too far too fast; they may lose interest. And don’t expect at-your-side compliance at this stage. You’re just linking the word with an already near-you position. Good form comes later

. When pups hold concentration for about 20 feet, I quit giving the treat while heeling. Instead, I stop and slowly bring the treat toward the pup’s nose, then above it. As the nose comes up to follow the scent, I continue the motion over the head. As the rump starts down so the head can still follow the treat, I connect the action with, “Duke, sit!” The moment his butt touches the ground, Duke gets the treat along with praise generally reserved for straight-A report cards.

You will hear that you should never use treats, and that a dog should obey you out of devotion. Forget it. Those amazing dogs you’ve seen on TV and in the movies are all treat-trained. With hunting-dog puppies, we use treats early on because 8- to 12-week-old pups will not always want to do what you ask but will comply when the incentive is greater than praise alone. The only other option is force, which is guaranteed to diminish or destroy a small pup’s enthusiasm and confidence permanently. Starting around 16 weeks, phase out treats by neglecting to give one here and there; then gradually increase the percentage of praise-only rewards. Eventually, the pup’s ultimate reward will become hunting.

**Preventive Feeding **
Dogs with hip dysplasia have become so rare among Purina’s Labrador retrievers that it’s hard to find one for testing. Why? Because Purina uses a technique called “limited feeding.” Growing pups are given about 75 percent of what they’d eat free-choice. Few of us are equipped to make that determination, but there’s an easier way. Just watch your dog’s physique and keep it slender. Feed your pup for ribs that are slightly visible but not prominent. Use a premium or quality food that is at least 25 percent protein and has complete and balanced nutrition for growth, such as Purina Puppy Chow or Iams Puppy Food. Serve the food in limited quantity (watch those ribs!), and you’ll get adequate growth without the joint damage that occurs when bones outgrow the muscle, cartilage and ligaments holding them together.