An extraordinary Doberman that outdid standard hunting dogs at their own game. 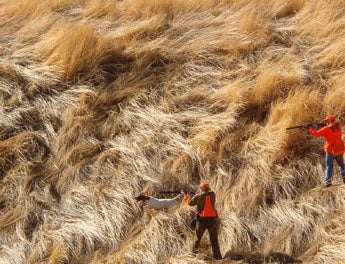 Ilse was exceptional from the beginning. Illinois hunter Stan Augustyniak and his son each selected a pup at the breeder’s house, then went to the kitchen to write checks and fill out paperwork. When they were finished, they turned to the doorway. The two 12-week-old pups they had chosen were standing there as if they knew. The others were outside playing.

Although he’s a hunter, Augustyniak decided on Dobermans because he loves their personalities. Ilse was his fourth and the only one that exhibited the early intelligence and cooperation of a superdog. Seeing this, he began training her immediately. Augustyniak showed her his wallet, hid it in the house, and told her to find it. She did. He switched to hiding and dragging a pheasant wing. Later, the wing was hidden or dragged outside.

By November, Ilse had been introduced to the gun, and she thoroughly understood the odor of a pheasant wing. It wasn’t necessary to teach her quartering. Augustyniak had taught “come” by saying the command and simultaneously pulling his hand toward himself. Dogs learn physical signals most easily, so Augustyniak could whistle softly for attention and wave her in if she ranged beyond 30 yards. If in doubt about her distance, she’d look back for his opinion. On her own, she learned to hunt into or across the wind to discover bird scent quickly.

“Other hunters looked at me like I was crazy for bringing a Doberman, but that ended when she’d mop up pheasants behind their dogs,” Augustyniak said. “She’d hear a shot and watch, and if the pheasant flew on, that’s where she’d find the next one. Their dogs would be searching a hundred yards ahead. I remember one runner that she trailed for a hundred yards and still flushed within gun range. I really didn’t try to perfect her hunting style. She was more productive doing whatever worked for her. Ilse would retrieve rabbits to hand. With pheasants, she insisted on pinning them to the ground with her mouth or a paw, but I never lost a bird I hit.”

Head of the Class
Eventually, Ilse learned 70 words, short command phrases and hand signals. Treats didn’t interest her. She just wanted praise and a playful tussle. “I taught her to bark on command,” Augustyniak said.

“Then I added stroking my neck with thumb and forefinger with each command. Ilse learned everything quickly. She was soon barking to neck strokes without voice commands. The kids loved it when I said Ilse could add and subtract in two languages. They would watch as I gave her problems in English or Polish and she’d solve them by watching my neck strokes.”

Most of her training began with a simple task, such as having Ilse step through a tire. Next, Augustyniak held his arms in a circle in front of the tire. Then he removed the tire and finally he raised his arms gradually higher until the dog was jumping through them. Ilse enjoyed all that, but what she loved most was hunting.

Early Weaning Update
In response to my column on Dr. Dennis Hermesch’s success with early weaning, some callers have asked if they can simply take a pup at five weeks. The answer is no.

Pups need to remain together for six weeks to learn how to get along with other dogs. Hermesch keeps the litter together and becomes their “mom” until six weeks. His pups imprint on him and then accept other humans as new moms. For the article, click here, or send an SASE to RR1 Box 143, St. Jacob, IL 62281.