Knowing when to pull the trigger on turkeys takes proper shooting form. 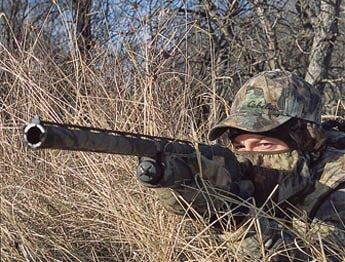 We were playing peekaboo, a big Iowa gobbler and I. Peering over my gun barrel, I twisted my body around the trunk of a shagbark hickory. Thirty yards away, the gobbler pivoted back and forth in full strut among several hens. Through a screen of saplings I caught fleeting glimpses of his pale blue head, tucked tightly against his fluffed body. I held my fire and waited.

Knowing when and how to make the shot is a critical turkey-hunting skill. Without it, you might miss or, worse, cripple birds. Here are five tips to help you know when to shoot this spring.

1. hold your fire
When a gobbler approaches, resist the temptation to fire the second he steps into range. Sure, that tight choke will probably kill him at more than 40 yards, but the pattern thins with every foot of extra distance. If he’s still approaching, let him come closer.

But not too close. Resist the tendency to be mesmerized by the bird and watch him stroll into your lap. Sometimes you will hear a frustrated hunter say, “He was only ten yards away; how could I have missed him?” The answer to this question is, “You missed him because he was only ten yards away.” Tight turkey chokes give little room for error inside 25 yards. Optimum range for most turkey chokes is 25 to 35 yards. Inside those distances you not only have excellent pattern density; you also have good pattern diameter.

2. time the shot
A turkey strutting right toward you seems ripe for the taking. After all, you can clearly see his head. Don’t be fooled. Because a strutting turkey’s head is braced against his body, his neck is less vulnerable to breakage. Moreover, look at the profile of a strutting tom and you’ll see that a portion of his neck is simply obscured from view, hidden behind a wall of feathers.

[pagebreak] Keep your sights firmly trained on the bird and wait for him to come out of strut. If you need to bring him out of strut, try a sharp cluck or cutt on a mouth call or even speak out, saying “hey.” When he extends his neck, shoot him. It’s also unwise to shoot at a walking turkey. The bobbing motion of a walking turkey’s head makes it a very difficult target, especially from the side. Wait until the bird pauses. You want a stationary target.

3. take aim
Many hunters aim at the turkey’s head, because it seems like the most obvious target. However, aiming at a turkey’s head can send much of the pattern sailing over the bird. When people miss turkeys, they often miss high.

We kill turkeys by breaking their necks, thus putting down the central nervous system. Therefore, we should aim at a turkey’s neck, not his head. I like to “rest” a turkey’s head atop my sight. That way, I know I’m sending the center of my pattern to the kill zone, not depending on the sparse fringe.

4. Squeeze, Don’t Jerk
Although we use shotguns to shoot turkeys, we don’t use these firearms like shotguns. In wing-shooting, we follow through on a flying bird and fire without paying attention to the trigger. Shooting turkeys is different. We aim the gun and squeeze the trigger as if we were shooting a rifle.

Turkey hunters can benefit from dry-fire practice, just like riflemen. Buy some “snap caps” from a local gun shop. Snap caps protect your firing pin from the shock of dry-firing. At home, chamber a snap cap and practice aiming and firing the gun. Get down in a hunting position, pick a spot on the wall and “shoot” it with the snap cap. Focus on squeezing the trigger smoothly. Try doing this for a few minutes every evening until you’re consistently tripping the trigger with a smooth, even squeeze of the finger.

When you do this, you’re accomplishing several things. First, you’re becoming familiar with your trigger and gaining better control of the shot. Second, you’re committing the aiming and firing process to tacit muscle meemory. This will serve you well in the emotional moment of the kill.

Finally, you’re visualizing your own success-a psychological practice that will increase real success in the field.[pagebreak]

5. keep clear
When setting up on a gobbler, try not to position yourself in extremely thick cover. Try to find a relatively open area. You’re not just looking for a place to hide yourself; you’re also looking for a place from which you can kill the bird. Many hunters set up in areas so dense they can’t move their guns or get a clear shot. Try to rely on good camo clothing and your ability to sit still to keep you hidden. Clear away any large limbs that might prevent you from swinging your shotgun. This will also open up your field of view so that you can better spot a silently approaching tom.

That was my mistake on the big Iowa tom. Close-growing saplings prevented a clear view of the bird. Eventually one of the hens detected me, and I never got her boyfriend. But I’ll be back this April, ready to pick my shot.