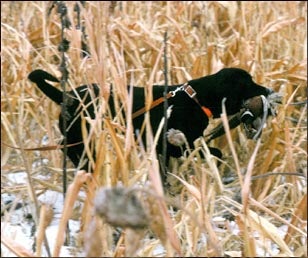 To train a dog, think like a dog.” We’ve all heard this and smiled knowingly… and then returned to training as usual. Unfortunately, when we fail to think like our dogs, we resort to anger and punishment in an effort to make our dogs think like us. The mixed signals this sends can turn an otherwise good dog into a basket case.

How can our species, with its highly developed language, ever understand how animals can think with little or none? Ask Temple Grandin, Ph.D., Department of Animal Science at Colorado State University, who wrote a book called Thinking in Pictures.

Because she is mildly autistic, Grandin, like dogs and other animals, thinks in pictures. She has no verbal thoughts. In contrast, highly verbal people may have no pictured thoughts. Luckily, most of us think in varying degrees of both pictures and words.

Before reading Grandin’s book, I was already convinced that dogs quickly develop a mental map of the area they hunt, probably through detailed sight and scent memories. And I marveled at dogs’ incredible memories for place. But I hadn’t made the connection between superior memory and highly detailed picture thinking. Given this mode of recall in dogs, it’s often best simply to train without words.

Teaching steady-to-wing is a good example.

Training Times Six
Begin with a rusty steel drum placed under a tree limb. Throw a check cord over the limb and snap it to Duke’s regular collar. Gently lift him onto the barrel and snug the cord. Hold on, but step to the front, using a traffic-cop gesture. Duke moves and his rump slides off. You quickly end the discomfort by lifting him back up. In a few tries Duke learns to stand balanced on the drum. Now start varying your location-eventually to the check cord’s end in all directions-but always with the traffic-cop gesture.

Next, with the dog reliably standing, sail a paper plate from near his head. Don’t give the hand signal. The picture has changed, and he goes with the action. Surprise! He’s being lifted back on the drum and learning that flying objects mean the same thing as hand signals. The last step on the drum is tossing pigeons. Again, he’ll try to go.

The greatest picture change comes when you place Duke beside the drum. With his feet on the ground and a pigeon flying, he’s gone, but the lunge and the forgotten cord take him almost straight up.

Finally, with a bag of pigeons, Duke on the cord and at least two different fields for picture changes, occasionally toss a bird past his face. Wordlessly, the cord restrains him. With practice, “wings” become the command to stand steady. Keeping Duke on a cord, allow him now to point planted pigeons before they’re flushed.

We’ve done at least six picture variations to make this an anywhere command, and the number six is equally important in yard training. You’ve seen the look on a hunter’s face when the retriever that sits perfectly on the patio doesn’t have a clue what “sit” means in a blind. Changing places six times for every obedience order will turn the orders into obey-it- anywhere commands.