Trapping is the key to saving game populations. 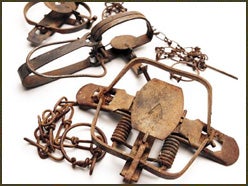 I just returned from an Alaskan moose hunt and was amazed at how few moose calves I saw. Not one. Nor did any of the hunters and guides see one over a 300-square-mile region, although we saw plenty of single cows.

What’s happened to the calves? The obvious answer is claws and fangs. Grizzly bears are more numerous in this area than ever, as are black bears and wolves. Moose calves are vulnerable to attacks by both black bears and grizzlies, although cows do their best to stave off attacks by predators. In the Yellowstone Park area where I live, I’m seeing a serious lack of elk calves in the summer and fall. So are my hunting pals and outfitter buddies. What’s happening to them?

I believe the exploding wolf population is to blame for the reduced numbers of elk calves, especially since young elk are primary prey for wolves.

Everyone knows that an animal that eats meat has an impact on the prey population. The big question is how much. A huge amount of research over the decades has attempted to address this question. Typically, a research study is attacked by people who oppose its premise and embraced by those who accept it. In other words, if a study shows that foxes are impacting pheasants, people who like foxes have a problem with the study, while hunters have a problem with the foxes that are feasting on the birds. To them, the study is right on. That being the case, research on predators is always a two-way street.

I received two degrees in forestry and wildlife, and I’ve always been frustrated by professors and biologists who claim that predators have minimal impact on prey populations. It seems this is a perennial mind-set. According to them, deteriorating habitat is always the primary cause, along with severe winters, drought, disease and parasites. That’s true in some cases, yet it seems that everything but predators usually gets the blame.

Coyotes and Lions
It’s popular-and politically correct-to claim that predators take the sick, weak and old. Not so, says Dr. Darwin Nielsen, a former professor at Utah State University. Nielsen made 11 trips to a mule deer wintering area and located and investigated 31 dead deer. He took photos of each and checked for tracks, blood, hair and coyote droppings in the snow. He also skinned the heads to observe wounds.

Nielsen determined that 28 of the deer were killed by coyotes, and that 25 of them were fawns. Contrary to general belief, severe winter weather and starvation were not factors. These were healthy animals in good physical condition, and much of the killing was done by single coyotes.

In Oregon’s Hart Mountain National Antelope Refuge, studies showed that coyotes were responsible for at least 75 percent of the pronghorn fawn deaths over a two-year period. Responding to the study’s results, the Oregon Hunter’s Association Board of Directors unanimously passed a resolution backing refuge managers’ plans to reduce coyote numbers significantly on the refuge.

Mule Deer Are Down
Mule deer populations have dropped drastically from the banner years of the 1950s and ’60s. Everything has been blamed, especially winter range habitat loss, which is certainly true. But take a look at the predator scenario then and now. Forty years ago, coyotes were trapped, poisoned and bountied. Now, fewer people trap or call coyotes because fur prices are down. The result-a booming population of coyotes, not only in the West, but in virtually every one of the Lower 48 states. Mountain lions were varmints with no seasons or bag limits. I also well remember those days when we treed and collected bounties from several lions every winter.

Mountain lions are intensely managed now, and most states set a quota for each unit. When the quota is reached, the season shuts down, which results in high lion populations. Consider this: The average lion kills a deeer a week. That amounts to 50 deer per year. Most states have at least 1,500 lions within their borders, which translates to 75,000 deer taken by lions in each state. That number far exceeds the hunter harvest on a per-state basis anywhere in the West.

Pest Control
Obviously, predators do take a toll on prey animals that we enjoy hunting. Trapping is a primary option for decreasing predator numbers and is an effective wildlife management tool. Sadly, low fur prices, anti-trapping laws and less interest in trapping have all diminished this activity in America.

Without trapping, nuisance animals often proliferate and subsequently become carriers of rabies and other diseases. Coyotes, raccoons, skunks and other animals play havoc in urban as well as rural areas where they’re not controlled. When I was a kid, I trapped muskrats, raccoons and opossums and then graduated to beavers and mink. Finally, when I had the skills, I learned to catch foxes and coyotes.

In those days I hardly slept all night, wondering what the morning’s trap inspection might bring. And of all the outdoor activities we participate in, none comes close to teaching more about animal habits and behavior than trapping. Show me someone who runs a successful trapline, and I’ll show you a person who is an expert woodsman. In answer to those who say that trapping is cruel, remember that nature itself is cruel. Nothing dies easily in the outdoors.