Expert tips to get coyotes, bobcats and foxes in close! 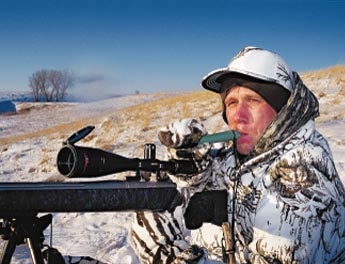 In need of a breath, I stopped forcing air through my vintage, hand-me-down predator call and scanned the snow-blanketed plain for signs of movement. My breathing barely had time to normalize before the sight of a moving speck in the distance returned me to the brink of hyperventilation. A coyote had triangulated my position from more than a half mile away and was moving toward me like an ant marching across a sprawling white picnic blanket.

Back then I knew enough about hunting to sit still, but the approaching coyote strained my composure. By the time the coyote breached the 100-yard barrier, my heart was thumping a drumroll. When it paused to sniff some sagebrush, I planted the riflescope’s reticle on its chest and kicked off my coyote-hunting career. It was the first coyote I had called in, and I felt an immediate sense of accomplishment. Seventeen years later, coyote hunting still causes my heart to race.

If you feel the same way, you probably already know a lot about coyote hunting. Just in case you missed a few things, however, let’s review the basics.

1. Finding Coyotes
Locating coyotes is seldom difficult. As the numbers of their natural enemies, such as wolves and bears, have diminished, coyotes have flourished, expanding far beyond their traditional Western homeland.

Today, coyotes inhabit all corners of North America, and most proclaim their territorial dominion by vocalizing at dawn and dusk. A drive through the country in the early morning or evening can reveal the location of various packs. Every mile or so, stop, shut off your truck’s engine and listen. If you hear a howl, note the general location on a map and move on.

Stay on the roads that border overgrown terrain, which coyotes prefer for security. Coyotes take up residence in thick woods, rugged bluffs and steep canyons. In open country they gravitate to grassy depressions, eroded gullies, cattail sloughs and large, brushy hedgerows for cover.

If the coyotes in your area are the silent type, trigger their howling instinct by blowing an ambulance-style siren or air horn at dawn and dusk. Assuming your coyote vocalizations are reasonably realistic, toss in a few howls of your own. Young-of-the-year coyotes seldom can resist the temptation to answer a cousin.

Don’t be surprised if pressured coyotes refuse to shout back, however.

A recent paper published by the University of California, Berkeley, reveals that “alpha,” or dominant, coyotes won’t reply. They leave the yapping to the younger crowd.

If you don’t hear any coyotes, look for visual clues such as muddy prints along road rights-of-way or next to waterways. A fresh snow also reveals coyote tracks.

Backtracking a trail-whether snowy or muddy-can lead to coyote bedding areas. If scouting time is limited, ask people in the neighborhood if they have seen coyotes. Farmers, ranchers, bus drivers and rural mail carriers cruise back roads regularly and frequently spot wildlife. Don’t be surprised if a few farmers invite you to visit their land and let you take a few coyotes home with you when you leave.

2. Making an Entrance
It’s difficult to sneak up on a coyote, or anywhere near one. Coyotes combine their senses and instincts to create a nearly impenetrable security system. To get within shooting range, take advantage of wind direction, approach stealthily and camouflage yourself from head to toe.

Always enter an area with the wind in your face. There won’t be anything to hunt at your destination if you don’t. Stay out of sight, or at least maintain a low profile. The best coyote hunters use land features to hide themselves as they travel to their calling sites. Hills, gullies, creekbeds and trees provide cover. Travel to and from a stand in the dark if it’s feasible. Leave your flashlight in your pocke to be turned on only in case of an emergency.

Most coyote setups are at an elevated spot, but a hunter still needs to keep away from the skyline. If the hill is not too tall, circle around the sides to avoid skylining; if the hill is large and you have to go over the top, hunch over and move quickly into position below the horizon.

3. Setting Up
Why an elevated vantage point? Coyotes are sneaky, especially when stalking prey. If you don’t have a good view of your surroundings, you’re liable to miss a coyote’s approach. They’re masters of keeping out of sight by entering and exiting areas along depressions and lowlands. Hilltops, ridges and mountainsides offer stadium-style views. If you hunt flatlands, perch in a tree stand or make use of what’s available, whether it’s a haystack, a barn loft or junked farm equipment.

One morning a buddy and I set up high on a prairie hill where we could see for a few miles. Prairie grass and gently rolling hills provided the only cover. Three minutes into our calling a coyote charged out of a small crease in the prairie and sped in our direction. My partner rolled the coyote at 20 feet. Even in that wide-open environment, without an elevated setup we would have failed to spot the coyote before it detected us. Every setup should have you facing into the wind. However, nearly every incoming coyote will attempt to circle downwind of the apparent victim it hears. It often pays to hunt with a partner who can watch the downwind side for sneaky incomers.

4. Choosing a Call
Don’t get hung up on brand names. Your first priority is to obtain a call that you can use effectively to mimic the sounds made by creatures that are on the menu of local coyotes. Most sporting-goods stores have plenty of rabbit-in-distress calls. Since coyotes dine regularly on bunnies, a dying rabbit call should be in your repertoire. Just remember that it doesn’t take long for a coyote that’s survived a few encounters with hunters to determine that screaming rabbits also suggest hidden humans.

To outwit experienced coyotes, vary your distress sounds. Coyotes eat just about anything that moves and respond to a variety of sounds made by what they think are injured critters. Be prepared to duplicate the sounds made by rodents, woodpeckers and fawns. To further the deceit, add in the raucous call of crows.

Try mastering the language of the coyote to provide another realistic dimension to your setup. Coyotes have a wide range of howls, barks, yips and whines. Steer clear of barks, which represent a warning, and focus on non-aggressive welcoming howls. A drawn-out howl tells other coyotes “I’m here” and challenges them into an appearance as they look for the intruder who’s invaded their turf.

Begin and end prey-in-distress setups with howls, or use howls by themselves to attract coyotes. How long do you wait? At a minimum, keep still for 15 minutes. I always stay at a site for at least 30 minutes; most of the coyotes I’ve shot showed up later than that.

5. Taking the Shot
The approach of an incoming coyote can be every bit as unnerving as seeing a buck with a big rack move toward you. Success depends on a number of things that you should have already dealt with. First, be sure to camouflage everything, including your movement. Once the calling starts, move only when necessary and at a sloth’s pace. Since coyotes rarely run straight toward your rifle barrel, you’ll need to make slight aiming adjustments before you shoot.

When it’s necessary to move the rifle, do so when natural cover such as hills, grass or trees obstruct the coyote’s vision. If the coyote is crossing open country without obstructions, move slowly while the animal is trotting. Instead of making a bold move immediately before shooting, adjust slowly as the coyote edges closer. A close coyote will likely see any major movement and kick in its afterburners in an attempt to escape.

Unless you’ve perfected shooting at pint-sized, running targets, shoot only at standing coyotes. It’s easy to stop an incoming coyote. Keeping your reticle on the coyote, bark sharply like the neighbor’s mutt and squeeze the trigger as the coyote looks for the interloper.

Coyote hunting, like turkey hunting, fascinates a lot of hunters from the start. It’s challenging because you have to develop specific skills to be consistently successful, and the action can be excitingly fast if you’re in prime coyote country. If you’re hooked the first time a coyote shuffles into rifle range, embrace the addiction. And welcome to the club.

Don’t Forget Bobcats and Foxes
More often than not, coyotes share their range with other species of predators. A hunter doesn’t have to choose between hunting coyotes and going after a smaller predator, however. Bobcats and foxes, both red and gray, also respond readily to a prey-in-distress call. A .223 is an ideal caliber for bobcats and foxes-and coyotes, for that matter. Depending on whether you’re hunting for fur, and what your predator quarry is likely to be, you might want to vary your bullet selection.

BOBCATS inhabit much of North America, favoring overgrown, undisturbed habitat. Thick cover abounds with the small prey that make up the cats’ diet, and it provides security from larger predators.

Bobcats use their sharp eyesight and acute hearing more than their noses to guide them.

Bobcats eat a variety of small prey and respond well to high-pitched squeals. Even so, try an occasional fawn bleat if other calls fail. Bobcats are not as plentiful as coyotes and are slow, careful stalkers. Be patient and wait at least 30 minutes at each site before moving on.

Red foxes thrive on small rodents and birds, and your calls should reflect this dietary preference. Natural shyness, mated with the standard paranoia of an animal down on the food chain, results in a slower response time for red foxes. Thirty minutes is not too long to wait for a slinking fox. If you live where coyotes are abundant, don’t spend a lot of time trying to call in red foxes; chances are the coyotes have already wiped out most of them.

GRAY FOXpopulations extend throughout much of the southern and eastern United States. Like the red fox, this small but cunning predator seeks out thick brush and timber in an effort to escape large predators and hunt its prey. Small rodents, ground-nesting birds, frogs, lizards, insects and fruit fill its menu.