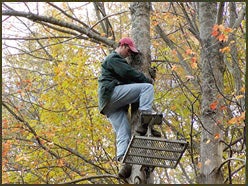 When the army of pumpkin-colored hunters swarms your woods in a couple of weeks, you have a couple of options. You can walk out onto a ridge, plop down on a stump and hope the barely organized chaos drives a buck into your crosshair. Or you can go into opening week with the odds in your favor, knowing that the best way to shoot a big deer is to play the pressure. Here are some strategies to help you deal with common gun-season scenarios.

Opening Day
On opening morning, you can use the ruckus across the fence to your advantage, but you’ll need to outfox your pals to do it. Study aerial photos for interconnecting draws, strips of timber and finger ridges that deer use when moving between sections of cover.

Most hunters are pretty predictable. You probably already know where your buddies’ favorite spots are. Scout for small, thick draws or ridges that other guys overlook. A good funnel will be loaded with brush and pockets of pines or cedars.

Set a tree stand to overlook a funnel in the head of a hollow or on the side of a slope, where you can see far and shoot safely into the draw. When the guns start booming, something’s gotta give. Sit until at least noon. You’re almost sure to see some deer. And you’ll be in the hot seat for a rutting buck that comes by on natural movement.

Party Crashers
One morning I heard rumbling coming through the woods. It wasn’t an ATV; it was an F-150! The knucklehead four-wheeled right down the overgrown power line I was watching.

I was so steamed I climbed out of my stand and moved. But you don’t always have to do that. When some guy crashes your party, you might figure he spooked all the deer in and around your spot. Maybe, but maybe not. A buck might have been a mile away when the intruder passed. As long as a hunter keeps on walking or driving well out of sight, sit tight. A buck might come along later. And with everyone moving around, your chances are better if you sit and let others push bucks past you. Pressure is a fact of life, so accept a bit of it. But if people hound you for two or three days, pull your stand and head for a more secluded spot.

Out-of-the-Way Hot Spots
Let’s say you and 100 other guys are trying to tag a mature buck in a giant national forest such as Pennsylvania’s Allegheny or Virginia’s Jefferson. Some old advice is still good advice. Scour topos and aerials for remote ridges, oak flats and thickets the crowds might miss or be too lazy to hike out to. Cutovers and thinned blocks are prime whitetail habitat, so look closely for those. With 100,000 acres or more at your disposal, you can find spots with elbow room and hot buck sign, but you’ve got to scout hard to find those places.

If you’re in good physical shape, be willing to hike a mile deep into a forest where fewer people hunt, but make sure you have a plan to get the buck out with you. (Hey, it always helps to think positive.) Team up with a buddy or two so you can help each other out when a deer goes down.

Once you find a good spot, hunt there all day during opening week. You never know when a rutting buck will dog a doe past your post-noon maybe, especially during the full-moon week this November 9. When other hunters walk back to their trucks around 10 a.m., and then head back to their stands around 2 p.m., they might push a buck to you.

Plan B
Let’s say at 5 a.m. one morning you drive to your favorite spot and shine your headlights on a truck parked there. Keep on driving. If you were already in the woods, you wouldn’t want that guy to walk in on you.

It’s frustrating, but no big deal if you were smart and scouted at least three different fields, ridges or draws before the season. Move on to “stand B.” Hunters tag some huge bucks in their second- and third-best spots every fall.

Scour your maps and scout hard for such a spot. If deer have moved into a hole, you’ll know it by the ripe trails and tracks and maybe some rubs or scrapes on the edges. Stop, back off and set up 100 yards or so downwind.

Now hang tough. Deer can’t stay underground forever. They’ve got to eat. As the pressure eases, a buck will stick his neck out at dawn or dusk. Then all you’ve got to do is shoot straight.