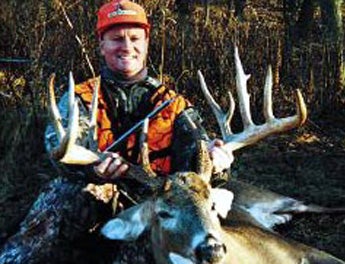 Deer alter their behavior patterns significantly during the rut, creating many new hunting opportunities that don’t exist during the rest of the year. Scrapes and rubs betray their movements, providing hunters with valuable clues to the best places to set up stands. Calling is another effective strategy during the rut. But my favorite technique is horn rattling.

My first experience with horn rattling occurred 30 years ago in Texas with Murray Burnham, who owned Burnham Brothers game calls at the time. I watched in awe as Murray expertly twisted and rubbed the antlers together and was astounded when a buck charged in. The deer winded us, and I never got a shot, but I became a believer. Up until that point I was skeptical that the technique would work.

Not Just for Texans
Rattling is often considered a “Texas tactic.” I know plenty of hunters who claim it won’t work outside the Lone Star State. That, of course, isn’t true. The reason rattling works so well in Texas is because of the high buck-to-doe ratio, as well as the large concentrations of deer found there. When you rattle in Texas, you can be reasonably sure that one or more bucks will hear you if it’s a calm, quiet day. Try that in the big woods of the north, where there are far fewer deer per square mile, and you might need to make a half-dozen setups before a buck will hear you. And because there’s less competition among bucks, most that do hear you might simply ignore your efforts.

Another thing to consider is that rattling works best in the pre-rut- that week to 10 days prior to the peak of the rut wherever you live. (See “The Best Days for Deer,” October.) Once the rut peaks, bucks are on the run chasing does and won’t come to the horns.

Confidence is the name of this game. You should rattle with the mind-set that if a buck hears you, he will react positively. I like using real antlers because none of the synthetic antlers or gadgets sounds quite as realistic to me.

**Rattlin’ Tips **
When you begin a rattling sequence, don’t crash the antlers together loudly. Start off slowly and quietly. Try raking some nearby bushes first. Sometimes just the sound of antlers rubbing bark is enough of a challenge to bring a big boy in to see who’s moving into his territory. Then gently tickle the antlers together for 15 seconds or so. This way, if a big buck happens to be close by, you won’t spook him. Start whacking those antlers together hard right off, and I guarantee he’ll go the other way.

Once you’ve completed this first quiet sequence, try twisting and grinding the antlers together to imitate two bucks who have finally locked up. Now you can get aggressive; that’s what big bucks do. Keep it up for a couple of minutes. Beat the antlers on the ground to imitate bucks stomping their feet. Rake nearby bushes as bucks would if they were having it out. Throw in a few grunts if you use a call.

Take a break for five minutes and try again. Be alert for bucks sneaking in on your downwind side. And listen for deer charging in through the brush. Sometimes the speed at which they appear is incredibly fast, so you need to be ready for a quick shot. If you see a deer that hangs up by looking at you from brush, try this wild trick-raise the antlers over your head in full view so the buck can see them. With luck he’ll forget caution and run in closer for a better look. (Obviously, this trick is not recommended in hard-hunted areas where safety may be a concern.) And don’t be surprised if a big buck trots in with fire in his eyes.