A world-record grizzly comes on at a dead run. 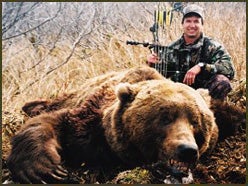 Webster’s Dictionary defines “insanity” as “a deranged state of the mind,” which, according to Bob Fromme of San Diego, Calif., pretty much sums up his own state of mind when he decided to hunt grizzlies on Kodiak Island with a bow.

In April and May, Kodiak Island’s 5,000 bears are often visible as they graze in open meadows near the island’s beaches. It was in these meadows that Fromme and his guide, Tom Kirstein, owner of Alaska Adventures Unlimited, hoped to find a big bear.

Using a skiff to cruise the island’s bays, they glassed the hills above for a trophy bruin. The technique paid off on May 2, 2003, when Kirstein spotted an unusually wide track plowed through the snow above the alders.

Pulling the skiff ashore, Fromme and Kirstein moved quietly along the fresh track. An hour later, they spotted the grizzly in a clearing a few hundred yards ahead.

When they were within 65 yards of the animal, the big bruin saw them. “When I get busted by an elk, I make a cow call. When a deer spots me, I’ll grunt. But when the grizzly saw us, the only sound I could think to make was a scared varmint call,” says Fromme.

The unorthodox tactic worked. The bear nibbled on some grass and eventually lay down. After waiting 15 minutes, Fromme slipped off his boots and began a slow crawl toward the bear. The sun was setting, so the hunter knew he had to make his move, even though the big bear was lying with its head facing him. Fromme continued his stalk until his range finder flashed 40 yards. He was close enough, but he didn’t have a clear shot at the bear’s vitals. As he looked for a better angle, the big boar rolled over onto its side like an old man getting comfortable.

Now out of the bear’s line of sight, Fromme slipped closer. He was well aware that if the brute caught him sneaking in, the stalk-and possibly his life-would be over. At 18 yards, Fromme was finally in the perfect place for a shot, but as he readied himself, the grizzly looked up and spotted Kirstein moving to get into position to cover Fromme with his .416 Rigby.

The bear stood up, exposing his vitals. Fromme drew and fired. The arrow angled through the bear’s lungs until it protruded from its opposite shoulder. The big bear let out a deep growl and bit at the arrow. Then it began a death charge. “For some reason I could tell his eyes weren’t focused on me, so I didn’t move,” recalls Fromme. “The bear charged right by me.”

After blowing by, the giant slowed, stumbled and, finally, dropped. It squared 10 feet 4½ inches and set a new Safari Club International world record, scoring 2813/16 inches according to the SCI system.