A veteran bowhunter's toughest hunt ever in pursuit of a world-class bull. 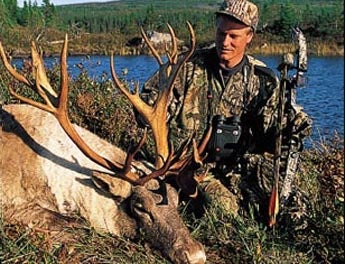 I felt like I was walking on a thick, wet sponge. For every two steps forward, it seemed like I stumbled one step back. I was on Newfoundland’s bogs, a mat of interwoven roots that in places floats atop a layer of water like a giant raft. From the perspective of the airplane into Gander, the bogs looked like flat fields of grass, but once on the ground, I quickly realized why the designation “killer bog” was coined.

I had my sights set on a world-class woodland caribou bull. In the previous two seasons, rifle hunters in this camp run by Mount Peyton Outfitters had taken two bulls that exceeded the archery world record. On the second morning I stalked within 40 yards of a bull I thought would score about 320 Pope and Young, a score that would place it well into the top five, but I passed him up. I was looking for a world record.

After two more long days of searching, however, I began to rethink my decision. Could the bull be bigger than I had thought? I desperately wanted another look. While glassing from the same high rock that I had spotted him from before, I was pleasantly surprised to see him tending several cows on a small bog about a mile away. He looked huge. Given another chance, I wasn’t going to hesitate.

Newfoundland is an island about the size of Iowa, Missouri and Illinois put together. With nowhere to go, the province’s woodland caribou don’t migrate much. It’s even possible, as we proved, to see the same bull in the same area on more than one day.

** Going for Broke**
I locked my position into a GPS and left my guide, Todd Gillingham, behind. With Gillingham’s hand signals I started my quest. It was my intention to dog the bull until I got an opportunity to slip close enough for a shot.

Forty minutes into the game, dense fog rolled in and reduced visibility to 100 yards. Using the fog for cover I made a bold attempt on the open bog, but cows pinned me down while I was still 20 agonizing yards short. By midmorning the fog burned off and I had to make a decision: hold back and preserve some level of personal comfort or do whatever was necessary to get a shot. The answer was easy. The only question was who would die on that bog first, the bull or me.

That decision led to miles of crawling across two bogs in an effort to stay in sight of the bull. I doggedly stayed 200 yards behind him for the entire morning until one by one his cows began drifting off to join other herds. Finally, he was alone and vulnerable.

As he left the open bog to skirt a small 5-acre island of trees, I jumped up on stiff legs and ran forward. But when I peeked around the section of cover, he was gone. Amazed, I walked all the way around the island and then searched for several miles in the direction in which he’d been walking. I saw only cows and lesser bulls bedded in loose bands.

Dejected, I trudged back to the island of trees where, several hours earlier, the bull had disappeared. Then it hit me; he must have gone into the trees to bed down. I picked the most heavily used game trail and tiptoed into the wind. I moved slowly, waiting for my eyes to adjust to the shade, when suddenly there he was.

After trailing him for hours across open fields, it was eerie to suddenly see him so close. I tried to take advantage of his surprise by finding an opening big enough to shoot through. Stooping, I found I could shoot through a small hole. I quickly spread my legs wide to establish a solid base, planted my 40-yard pin on his chest and triggered the shot. On the very peak of its trajectory, the arrow nicked a branch I hadn’t accounted for and deflected into the narrow strip of meat on the very top of the bull’s neck. He bolted.

After an arduous day and fresh charge of adrenaline gone dry, I was left feeling weak and sick.

A painstaking hour of blood trailing later, I spotted him walking across an open bog. Againn, falling in behind the bull I started crawling, feeling like a wolf. It was more than a mile across to the main body of timber and I stayed 150 yards behind him the entire way. His progress was slow, giving me hope of quickly overtaking him at the edge of the timber. As he approached the jungle I got more aggressive, moving faster to close the distance before he would be swallowed up by one of the many game trails that dissect the heavy timber.

I got too aggressive. He saw me and made a fast loop to catch my scent. When he did, he hit the timber like a freight train. I knew then that he wasn’t badly injured.

With all the zigzags I must have followed that bull for 15 miles, many of them on hands and knees. I hadn’t had anything to eat or drink for the better part of a day and my heart rate was elevated from exertion. When I finally came down off the adrenaline that had been my sole source of fuel, my tail was dragging in the bog grass. I was still four exhausting miles from where I had left my guide. On my final climb to the top I could go only 40 yards at a time before sheer exhaustion forced me to lie down for several minutes. When I finally got back to Gillingham, it took about 30 seconds for me to consume two cans of pop, a sandwich and a granola bar. Somewhat revived, I told the story as darkness closed the show on a breathtaking vista that took in 100 square miles of timber and bogs-the heart of Newfoundland.

One More Try
Believe it or not, the next sunrise revealed the same bull (a small spot of dried blood on his neck) chasing cows on the same bog where I’d seen him the morning before. I had mixed emotions. I was happy to see him doing well, but deep down I was not mentally prepared for another do-or-die day on the bogs. I’d like to say I gutted it out and finally shot the big bull, but I never made it that far. During the early part of the stalk I ran into another bull in the old-growth timber at the foot of the rock. He represented the proverbial bird in the hand. Without really thinking about it, I took the easy shot. Subconsciously, shooting that lesser bull might have been a way out of what I feared would be a repeat of the previous day.

Thus ended the most memorable hunt of my life. I found out that hunting is sometimes more about learning what’s inside of you than what’s over the next hill.