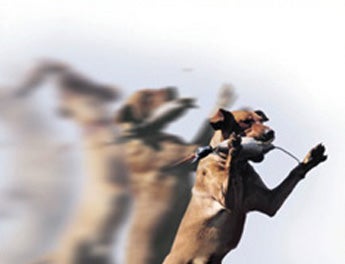 I love it when a hunter training his own dog comes up with a solution to a problem pros have struggled with for years. This time I’m especially excited because it involves the complaint I hear most frequently: My dog won’t deliver to hand.

Don Goodwin Jr., powerhouse operator and grandson of an old-time market hunter in the Illinois River Valley, knows what the pros have done and wants no part of it. First, he refuses to subject a dog to the sometimes brutal techniques of force breaking. Second, while the modern “trained retrieve” techniques are vastly more kind, they require four to six weeks of daily training to be effective. While Goodwin enjoys training dogs, he’d rather spend more time hunting or fishing.

Goodwin’s approach uses children and fun to jump-start a dog’s latent motivation. In season, he takes a small duck that he has saved and hands it to his kids for a game of “keep away” with the dog. Don has control with a check cord that’s long enough to reach the kids and then some, so the dog can run back and forth.

Beginning with the dog seated at heel and the youngsters standing well apart, Goodwin reminds the dog to “stay.” At this moment, the kids begin throwing the duck back and forth in high, easily seen arcs, excitedly yelling, “Look Duke! You can’t get it, Duke!” If the dog’s hip muscles tighten and his rump lifts, Goodwin reminds him with another, “Stay!” When Duke is so excited he can’t stand it, Don sends him to fetch that duck.

Now the kids time their throws so the bird leaves their hands just before Duke can snatch it. After three to five tosses, accidentally or otherwise, the duck is fumbled or flies close enough for the dog to grab it.

Quickly, kids in hot pursuit, the dog tries to run off with his prize, but Goodwin has check cord control and takes in slack as available. The instant the chase starts, Don stoops low and blows the “come in” signal with his whistle. The kids now herd around Duke, and the dog moves closer to Don, hanging onto the duck for dear life. Finally, Duke reaches a predetermined point a few feet from Don, the kids stop, and the dog can be reeled in the rest of the way without a tug-of-war.

If the dog drops the bird, the teasing resumes. If Duke resists releasing, Goodwin orders “Give” and blows sharply in the dog’s nose. Keep on

playing until Duke will fetch to hand without the check cord. “Your dog won’t drop birds again,” Goodwin says, “and after a few regular fetches, his releases will be back to normal.”