A look at man and dog from above reveals patterns of interaction. 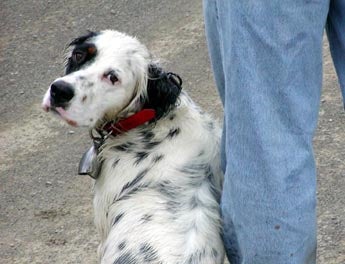 I don’t believe there’s ever been a hunter in an after-the-hunt conversation who hasn’t wondered out loud how far the dogs ran that day. Ted Gartner is an avid bird hunter who wondered about that and more…and did something about it. He taped a global positioning system, or GPS, to each dog’s collar; each dog’s owner carried a unit as well.

He found that his pointer ran 2.5 miles for every mile he walked. His buddy’s Lab covered 1.5 miles for every hunter-mile. More fascinating, they hunted prairie chickens and sharptails in Nebraska sand hills, pheasants in South Dakota and ruffed grouse in Minnesota and discovered that while speed and distance covered varied with terrain, the hunter-dog travel ratio was the same. This ratio will vary among breeds and will change for every hunter/dog partnership. Essentially, a cooperative dog will hunt at a range where it can comfortably keep track of, and pace with, its hunter.

Because dogs have an incredible ability to remember places where they have found game, I wondered how often they recheck those spots. On a Texas quail lease, Ted discovered that it turned out to be every time. He identifies each covey find on his GPS with a waypoint and two numbers, such as 12-1. The first refers to covey size, the second to birds taken. The same circuit was hunted every weekend, so birds, place and time of day were very similar each time. How often dogs would recheck without this constant reinforcement of birds remains unknown.

Mystery Solved
Interestingly, at midseason the circuit’s three coveys vanished. When Ted found them, he discovered that coveys of 8 and 20 bobwhites had traveled over a big ridge and roughly two miles south-southeast to cover, water and distance from a road that was very nearly a mirror image of the habitat they had left. Ten blue quail farther east did essentially the same thing. All coveys left an altitude of 1,312 feet and resettled at…1,312 feet.

Ted learns all this by opening an electronic topo map on his computer screen and overlaying it with the GPS records, a study of which can produce amazing insights into canine intelligence. During a recent Hondo, Tex., demonstration of an exceptional German shorthair, the wind was from the north. The men walked two loops but most of the time were traveling either west-east or east-west. Whenever the men walked across the wind, the dog searched north of them. When they swung south, it made long reaches so it could hunt back into the wind. No training went into this dog’s search technique.

Advanced Involvement
A team led by Dr. Leonard Brennan, the Endowed Chair for Quail Research at Texas A&M;, used Garmin Global Positioning Systems extensively for a study published this year in the Journal of Wildlife Management. Until now, our understanding of quail hunting has been largely anecdotal. Harvest management has been based on intuition and trial and error. Discovering how well quail learn evasive tactics, and how long those tactics are remembered, might take further study, but much about the bird and the hunt has now been quantified. (Write to infofill@hometel.com for a copy of the study.)