How "Dog" learned more than she was taught. 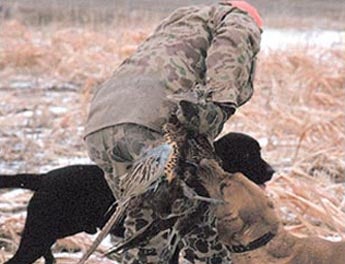 Perhaps you read my column about “Dog,” the greatest superdog of our time [BRACKET “June/ July 1999”]. Dog appeared-convincingly-to be doing math. I studied a video of Dog’s performance repeatedly and could not see the “trick.” Nor could Dog’s owner, James Evans of Naruna, Va., who had started Dog’s training by teaching him to fetch the phone. Evans had a heart condition that he thought might someday require an emergency call.

At first, Evans thought he was in fact teaching Dog math. Yet she didn’t always stop barking at the right number. It would turn into yipping, and Evans would quip, “Pay attention! We’re not dealing with fractions here.” This led him to believe that Dog was actually reading his mind, and that sometimes he didn’t concentrate hard enough.

Master trainer though he was, Evans did not understand that wolf ancestry makes dogs almost unbelievably adept at reading body language. Given the opportunity, they study us endlessly. With Evans’s permission, I rigged a free-standing wooden frame with a pull-up shade so I could zero in on Evans’s body in increments, looking for an involuntary physical prompt. I finally found a twitch but wouldn’t spoil the fun by revealing its location while Dog lived. Sadly, this is no longer an issue.

Experiencing kidney failure and in great pain, Dog was put to sleep last winter. James Evans died the same day from a heart attack he suffered as he watched Dog’s grave being dug. At the behest of James’s son John, Dog’s remains were later exhumed and cremated, her ashes placed in an urn next to James’s coffin in the family vault.

Friends and family will always remember Dog as the attentive companion who added years to her master’s life. She should also be forever remembered as the incredibly observant dog who, by herself, learned that the time to stop counting (barking) was when she saw a tiny twitch at the end of James Evans’s left thumb.