Setting Up for Turkeys

A half dozen tried-and-true turkey tactics can help you stay one step ahead of a master escape artist. 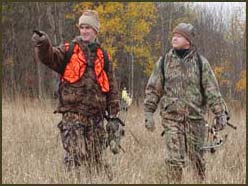 A mature gobbler has a razor-sharp set of survival skills, topped off by extraordinary eyesight and hearing. To bust a big bird, you need more than dumb luck; you need a plan. The following six set-ups have withstood the test of time, mainly because each anticipates turkey behavior-and staying one step ahead of these feathered Caesars is the best way to even the odds. The tactics are the same, whether or not you use decoys.

The Roost
About an hour before dawn, sneak to within 150 yards of where the gobbler has roosted. Sit in a place that offers cover as well as a clear shooting lane to where you will place your decoys. Clip a few low, leafy branches and stick them in the ground to break up your outline. Place one nonaggressive little jake decoy in a prominent position 20 yards out, exactly where you will have the most comfortable shot. (If the gobbler comes to your call, he is most likely to challenge the jake decoy first.) Place a hen decoy near it in plain sight. Sit down, be still, and let the woods awaken.

You want to make the first hen calls that the gobbler will hear that morning. Fifteen minutes before legal shooting time, make two or three soft, sleepy yelps. If the gobbler answers you from his limb, answer back with a few more sleepy yelps. Quit calling; he’s heard you. Wait until he is on the ground before you call again.

Once you have heard him fly down-or can tell by his muffled sound that he is on the ground-beat your hat against your leg to make flapping sounds as you emit a raucous fly-down cackle. Follow with yelps of increasing passion. Make a final run of yelps and cutts, then stop. Don’t answer every time he gobbles. You don’t want to get into a conversation with him; you want him to come looking for you. If the bird goes silent, watch out; he may be sneaking to you. Keep your gun ready and watch to the side as well as out front. He may circle you.

**The Freeze
** The woods are quiet; you haven’t heard a bird anywhere. You’re walking along using a “locator” call to try to make a turkey gobble and give away his location. Suddenly, a gobbler answers right in front of you. You’re on top of him! What do you do?

Freeze. Don’t go one step closer to the bird. If you’re using decoys, take out your little jake decoy and set it right there. If possible, set a hen decoy beside it. Now, back away on your belly. Crawl up against a tree about 20 yards from the decoys. Get your gun ready for quick action. Make a short run of soft yelps. The gobbler will probably boom back at you; he’s inviting the hen he heard to move to him. Use your hand to make some scratching sounds in the leaves; complement with a few soft yelps or clucks. Be coy. Call just enough to let him know you are there and not moving. A close gobbler is much more likely to come looking for you, even if he is with hens, than one that is farther away.

** The Floating Caller**
Here’s the situation: You’ve got a gobbler that will come toward your call but that won’t come in all the way. He’ll approach just so far, then drift back to his original strutting location. When you begin calling once more, he’ll move your way again-but he always hangs up outside shooting range.

When this persists, it’s time for the “Floating Caller.”

For this tactic, you need a hunting buddy; one of you will shoot, the other will call. The next time the gobbler drifts away, the shooter stays in place as the caller crawls back out of sight. The caller begins yelping from farther back in the woods, as if the lonesome hen is moving away. Judging from where he hears the gobbling responses, the caller “floats” this way and that so as to stay in line with the gobbler and the shooter.

If it works, the gobbler will maintain his cautious distance from the caller, but will follow the sounds of the departing hen and be drawn right into the waiting shooter’s rangge.

Sometimes gobblers “hang up” because some obstacle prevents them from coming all the way to you. You may not be able to see the obstacle, so just assume that when a gobbler you can’t see won’t come all the way in, he’s blocked by terrain, a blowdown or thicket, water, or a fence. (You also may be asking a gobbler to pass a place where he was previously ambushed by a coyote or a hunter, which naturally will make him particularly leery.)

When this happens, move and try to call from a different angle. Belly back out of there until you’re sure you can’t be seen. Then circle around the bird, staying out of sight, until you have changed the angle of his required approach by at least 45 degrees. If possible, stay above him. (I don’t know why, but it seems to be easier to call turkeys uphill rather than downhill.) If you have already been calling from above the bird, drop down to his level and try calling him from there. If that fails, too, move below him and try again. As long as he answers your calls, you can be sure you haven’t spooked him. If he goes silent, stay ready. He may be coming in.

The place to be
If you know where a turkey wants to be, you’re way ahead of him. That’s why you should always keep note of a gobbler’s movements.

For example, late in the morning you may hear a stationary bird gobble repeatedly. He is probably in one of his favorite strutting places. If that’s the case, he is likely to go there to strut again at the same time another day. Take note of the hour, and next time be there ahead of him.

Study suspected strut zones for signs such as broken bits of wing-feathers, J-shaped droppings, tracks, and long scratches on open ground made by the strutting gobbler’s dragging wings. Put a nonaggressive little jake decoy on the strutting place and a hen decoy or two nearby. Sit 20 yards away in a spot where you have a clear and comfortable shot. Yelp 5 to 10 times every 10 minutes or so to send the message that he has a hen waiting.

The gobbler is very likely to come into his strut zone quietly, so don’t move!

**When All Else Fails
** There are days when you just can’t find a gobbler. They go silent. You wouldn’t think there was a turkey in the world.

The thing to do when gobblers disappear is to set up in a spot where you have seen or heard turkeys regularly before and hope that they will come there again. Go to a known turkey hangout early and stay as long as you can. Put your decoys where they will be noticed and make soft, contented calls every 10 or 15 minutes to let any passing turkeys know you are there. Stay alert and be still, because on days when turkeys aren’t talking, gobblers are very likely to come in unannounced.