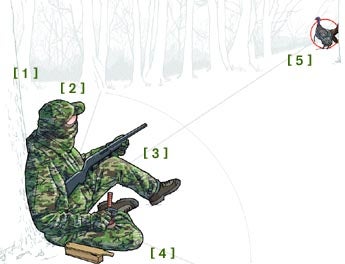 1. PICK A TREE
Get as close to the turkey as you can without spooking him.

Choose a tree or large rock to sit against. It should be wider than your shoulders and taller than your head.

Ideally, you want to be set up so that when the turkey steps into view, it will be close enough to shoot.

Sit so you’re hidden in shadow and the sun is at your back.

**2. RELY ON CAMO **
Don’t sit in a spot where you’re so concealed by brush your view is obscured or you can’t swing your gun.

Sit as motionless as possible and trust your camo clothing to keep you hidden from a tom’s sight.

3. TAKE A SEAT
Sit on the ground and bring up your left knee (if you’re right-handed) to provide a solid rest on which you can balance your shotgun.

Holding your gun at the ready will minimize motion when you adjust your aim.

Keep your head up and, moving only your eyes, scan the entire area before you.

Be ready for a turkey to slip in silently from either side of your setup.

**4. MAKE THE CALL **
Mouth calls, which require no body movement to use, are great for working a tom in close, but don’t overlook your favorite slate or box.

Arrange your calls next to you so they’re hidden by your raised leg. Subtly work them with your trigger hand when the tom’s head is behind a tree.

TONE IT DOWN When a turkey is near, lower the volume. Loud calling will only spook a bird that is close. “I don’t like calling to a visible turkey if I can help it,” says Quaker Boy Game Call’s Dave Streb. “If the bird is coming and you can see him, just keep quiet.”

TAKE AIM ** Once you spot the gobbler and see that it is almost in range, be sure to keep your head down on the shotgun’s stock and sight down the barrel. “A lot of hunters raise their heads to watch the turkey, which causes them to shoot high,” says turkey guru Ray Eye.

SWING IT** When setting up, turn your left shoulder (if you’re right-handed) toward the direction from which you expect the tom to approach. Then, if he slips more to the left or to the right, you’ll be able to swing the gun farther without moving your entire body. 5. SHOOT SMART
Make sure the gobbler is close enough for your shot to hit its neck and head with a dense, even pattern, ideally 40 yards out or closer.

Wait until the bird stteps into an open lane clear of limbs and brush.

If you need to adjust your aim, do so only when the turkey’s head is hidden behind a tree.

If he suddenly stops and raises his head, he’s seen something he doesn’t like. You have mere seconds to shoot before that tom dashes out of sight.

** BONUS TIPS** AVOID OBSTACLES
A lot of guys move straight toward a turkey and just set up. Remember that moving directly toward him may not be the best way. Something could still be blocking his approach to you, like a creek or a downed tree. Make sure you take those obstacles out of the equation.

MAKE A STAND
Sitting isn’t always your best position. Stand up to see over a rise or low brush. Stand against a tree with your gun at your shoulder. When the bird steps into view, just shoot it.

KNOW THEIR HABITS
Turkeys develop habits just as people do, and will follow a similar pattern each day if they’re not pressured by hunters. If a gobbler typically goes east from a roost, set up to the east of its roost. If it heads toward a particular field, set up near that field. This is where scouting can really pay off.