An ordinary pill bottle is the secret to this playful method for avoiding hardmouth. 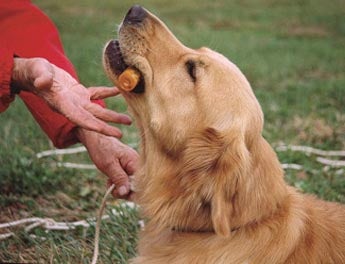 The simplest yet most unusual training aid ever to arrive on my doorstep was a plastic pill bottle filled with small rocks. Not surprisingly, it came from amateur trainer Don Goodwin Jr., who teaches dogs with fun and games.

The bottle is the essential ingredient in a two-step method for getting a soft-mouthed retriever without force training.

Step one starts on the pup’s first day in its new home. Goodwin begins preconditioning with variations of the food-bowl techniques outlined in my book Speed Train Your Own Retriever. His sequence is sit, heel, sit-stay, come.

During heel, he shakes the food bowl, which rattles the kibbles and captivates the pup. After a short heel, he slips the leash around a table leg and does a sit-stay, holding little Duke in place as he seats himself on the floor with the bowl in his lap. Being on the dog’s level makes the pup want to come to him, so when Duke settles into a short held-in-place sit-stay, he releases the leash with a come command and shakes the bowl again. Duke eats his meal as Goodwin runs his fingers in and out of the bowl, teaching that a hand around the mouth is a normal thing when something important is going on.

As the pup eats, Goodwin takes advantage of the time to establish pack dominance. He simply leans forward over Duke and strokes him, saying, “Good boy.”

Step two starts after Duke has learned sit-stay without restraint and as he tries his first clumsy retrieves. Goodwin introduces the bottle of rocks. Shaking it sounds like kibbles rattling in the bowl. Duke comes running, all pumped up by Goodwin’s excitement and the rattling bottle. When the dog is totally focused on the bottle, Goodwin says “fetch” and opens his hand flat to allow Duke to grab it. Duke runs around a bit, rolling the bottle in his mouth, but a leash assures that Goodwin can quickly take it again as he says, “Leave it.” Lavish praise follows.

There will be few repetitions of this shake, rattle and roll before Duke bites down and Goodwin hears plastic crack. He instantly scolds his pup but quickly makes up and goes on with the game. Duke soon realizes that chewing on the bottle displeases his pack leader and is on his way to becoming a soft-mouthed retriever.

By the time Duke is ready for formal fetch training, Goodwin already has a buddy that wants to please, won’t go through the “I got the dummy/bird; try to catch me” phase, accepts hands around the mouth and finds delivery to be a natural extension of the ongoing game. Finally, that game will include retrieving ducks reliably and without teeth marks. Rarely if ever will this fun-trained pup and his owner need to face confrontational force training.

**Popsicle Cure **
Dummies are firm enough to discourage hardmouth habits from developing in most dogs. But a soft, fresh-killed duck is a whole new level of temptation. It’s wiser to introduce duck scent through fetch practice with a hard frozen bird. But avid duck hunter Don Goodwin’s latest dog, Pete, a Chessie, adamantly refused to take cold objects in his mouth. So Goodwin got a popsicle, seated Pete, and teased him mercilessly, bringing it near but then jerking it out of his reach. When Pete wanted it so badly he was drooling, Goodwin brought it close. Pete knocked it off the stick and devoured it. At the rate of just one a day of his favorite flavor, banana, Pete was soon ready to fetch frozen ducks.

Rattle Training In 2 Easy Steps **
**1. Use feeding time to train for sit, heel, sit-stay and come. During heel, shake the food bowl so that the kibbles rattle, becoming a sound that excites the pup.

**2. **When the pup attempts to fetch, switch to a rock-filled pill bottle for the rattling sound. When the pup is overcome with excitement, let him grab the bottle and mouth it. Eventually, the plastic cracks and the pup is mildly scolded. The game teaaches that hardmouth is unacceptable.