Use these clues from the past to plan next season. 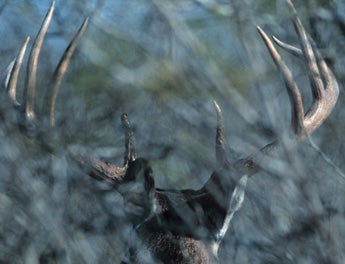 It’s quite a rush to go out in the late winter and discover a fallen antler that measures, say, 65 inches. Odds are the other side of the buck’s rack was just as thick and pointed as the beam in your hand. Add 16 to 20 inches to account for the spread of the antlers, and it suddenly becomes clear that a 150-class stud survived hunting season. But that chunk of bone is more than just a cool souvenir. It also sheds some light on the patterns of the buck that just dropped it, as well as on the movements of other deer in your hunting area-information that can help you when the next hunting season rolls around.

**Focus on food **
To begin your search for sheds, focus on food sources where whitetails congregate (and where many bucks drop one or both sides of their racks) from January through March. It’s not unheard of to find 10 or 20 sheds-or sometimes more-in and around fields littered with leftover corn, soybeans, alfalfa and the like. If you were smart last spring and sowed a few plots with brassica plants or other greens that deer prefer in the winter, check there. If you primarily hunt big blocks of woods, you won’t find nearly as many sheds. In these places, your best bet is to poke around for a bone or two in a gas line right-of-way, clear-cut or similar opening choked with browse.

Find one or more good-sized sheds and you know this much: At least one shooter roamed the property when an antler fell off his head as recently as days, weeks or a month ago.

It’s not a stretch to surmise that the buck, along with other deer, traveled there in the post-rut as well, when other foods were drying up. Keep this place in mind. It’s a spot you’ll want to glass and check for sign when hunting next December.

Branch Out
Walk the edges of a crop field or food plot and look for deer trails that wend their way back into the woods. Since it’s still weeks before the spring green-up, the paths will be matted to the ground and easy to spot. Walk them and scout. You might spook some deer, but with the next bow season still eight months away, who cares? You just might find another shed a deer dropped on his way to or from feeding. Also keep your eyes out for months-old rubs and scrapes. Find big rut sign along a trail and your timeline for next season just got a whole lot better. Now you know that at least one good-sized buck prowled the area last October and November. Veer off the trail and check nearby ridges, points, creek crossings and other funnels. With the leaves off the trees, great spots for next fall’s stands will jump out at you.

[pagebreak] If you don’t find many rubs or scrapes, that tells you a lot as well. Few deer rutted in the area three or four months ago. But from the sheds you picked up and the activity on the trails, you know some animals moved in to feed and mingle during the recuperation period of the post-rut. You’ve found a spot that might be pretty hot next winter, but not as active early in the season. Look for a good spot to place a tree stand or ground blind, either near the food source or 100 yards or so back on a trail that leads to it.

Crash the Bedroom
Keep hiking a trail until you find an obvious bedding area. In late winter that might be a southern slope with heavy cover that gets midday sunlight, or the east side of a grassy ridge or knoll where deer hunker down to avoid a bitter northwest wind. During the season you would have stopped, tested the direction of the wind and worked the fringes of the sanctuary so as not to spook deer. But now, plow ahead.

Montana shed-hunting fanatic Dick Idol once told me he finds 60 percent of his huge sheds in and around thick cover where giants hide in winter. So dive in, go slow and look close. While you’re at it, analyze the rub lines and trails you’re sure to find. Anticipate the easiest and best-hidden routes a mature buck might use to enter aand exit the cover during various winds. That info will help when you come back next fall.

Iowa whitetail expert Don Kisky, who figures he has picked up some 1,400 sheds over the years, puts a lot of stock in searching bedding areas. “If you find large antlers in and around a cover for several years in a row, you know within a few acres where at least one shooter beds in the winter, and perhaps in the rut as well,” he says. “Hang a tree stand on a trail that leads to a nearby food source and you might whack a monster next season.”

Using What You Learn
Each year from 2001 to 2003, Montana bowhunter Luke Strommen picked up a set of sheds dropped by the same eight-pointer. Finally, in September 2003 Strommen killed the buck a few hundred yards from where he’d found the deer’s last sheds. The lesson: Cross-reference the location of found sheds with aerial photographs and maps to pin down the core areas of mature bucks on your property.