Will you be prepared for your shot at a big buck? 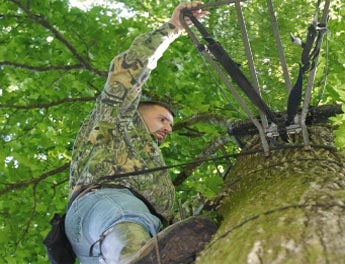 A huge Alberta buck still makes me wake up in the middle of the night in a cold sweat. It was a tough hunt, and on the last evening I was standing in a tree near an alfalfa field. A sudden hailstorm had sapped what little enthusiasm I had left. Though there was about an hour left in my hunt, I had resigned myself to the inevitable. I hung the bow, turned my back on the two trails and stared blankly at the ground, thinking about all the things I had to do when I got back home. Then-well, I’m sure you know the feeling. Without knowing why, I looked over my shoulder. I was shocked to see a giant buck walking in the direction of my stand. Nineteen yards away, he was already in my shooting lane and still moving.

I immediately panicked. I made a grab for my bow, yanked it off its hanger, loaded the release and drew the string. The buck never slowed down. By the time I had the bow locked and loaded, he was two steps from the end of my shooting lane. I swung the bow over, saw his massive antlers through the peep sight and then brought the bow down quickly. Unfortunately, I didn’t get it stopped before jerking the trigger. Thump! The buck trotted 20 or 30 yards and stopped for a moment to assess the commotion. Then he walked out into the field to eat alfalfa. He was none the worse for the experience, except for losing a tuft of hair from his brisket. I had missed one of the easiest shots of my life.

Change of Attitude
Seeing a deer before it is even remotely within range provides you with plenty of time to get your nerves under control and to get into position for a shot. That Alberta buck had no business sneaking up on me. If I’d only been watching expectantly, I would have seen him far down the trail and been ready for the shot long before he reached me. Instead, I let my guard down and assumed I was just wasting time in the stand. That experience taught me a valuable lesson: The last minute of a weeklong hunt is just as likely to produce action as the first minute. It takes only one buck to change the course of a season, and he can show up at any moment-even the very last. On that September day in Alberta I gave up early, a mistake that cost me one of the biggest bucks I’ve ever shot at. It was a blunder I’ll never forget…or repeat.

No Time To Relax
I know people who read on stand. To my mind that’s not much different from a hunter who loses focus, starts thinking about something other than hunting and stares off into space for long minutes on end. Loss of concentration is a deer hunter’s worst enemy. Being on stand is much more than just waiting dumbly for a big buck to stumble past. It’s an active experience.

**Watching: **Keep constant watch over everything around your stand-360 degrees. Your head should swivel from side-to-side like the sweep of a ship’s radar. Some people mistakenly think a stand hunter must remain motionless or the deer will see him. As long as he’s constantly watching, however, a hunter can move around a bit, and he’ll be more likely to spot a deer before it detects him.

Listening: Pay attention to any faint sounds that might indicate an approaching deer. In some locations, sound is the first clue that a whitetail is on the way. For example, if you hunt the side of a ridge on a cold morning, you’ll likely hear deer crunching leaves as they come over the top of the ridge and into range before you see them. Those few extra seconds of warning allow you to get in position and get your gun or bow ready.

[pagebreak] Glassing: If you can see a distant buck, you might be able to call him into range with a grunt call. Many of the bucks I’ve shot came in to a call from as far away as 200 yards. A binocular will help you spot deer and determine what they are doing and whether there’s any point trying to turn them your way. If you’re hunting with a gun, a binocular can reveal a buck that’s already wwithin range.

Rehearsing: A big part of preparation involves having a plan for how to handle every possible shot. Spend a few minutes studying the shooting holes and lanes around the stand. Know where you’ll draw your bow or rest your gun for every shot. Decide where you’ll shoot and where you’ll try to stop the buck if he’s walking. Use a range finder to measure the distances to various reference points within shooting distance. You might not have time to use the range finder when a buck shows up.

Be Ready for Anything
If you are serious about staying ready, stand during times of peak deer movement. That’s usually an hour or so after first light and a couple of hours before dark. I hang most of my stands on the side of a tree away from the direction from which I expect deer to approach. This lets me use the tree for cover, but it also forces me to stand and watch.

I find that I move around more when I’m standing than when I’m sitting, but that is something I can control. By standing I gain a valuable edge. I’m always ready to take a shot, even if the buck comes in quickly on the “wrong” side of the tree. If I’m sitting and the deer comes in on my right (I’m right-handed), I will have to wait for an opportunity to stand before I can shoot.

You’ll be in a much better position to handle anything that comes your way if you’re constantly ready for a shot. Hang your bow or gun when standing, but lay it in your lap when sitting. That way it will always be handy if a quick shot is necessary.

A few seconds of panic can follow long, uneventful hours on a stand. What you do with your mind during the wait has a huge impact on how you’ll perform when an opportunity arrives. The biggest buck of your life might appear when least expected. The challenge is to be prepared for any eventuality when he does.

Waterproof and Quiet
When you stay in a stand all day during the rut, sooner or later bad weather-usually in the form of cold rain-will pay a visit. You can slip on a rain suit, but often such clothing is so noisy you have to choose between getting wet or spooking deer. Now there’s a third choice. Browning offers Gator Fleece, a fabric developed in partnership with Polartec/Malden Mills. The new rainproof material is tough enough to turn the sharpest thorns, yet it’s as quiet as cotton. Inside, there’s a layer of soft fleece to ward off the cold. Gator Fleece is wind resistant and stretches to allow freedom of movement while you’re climbing to and from your stand, drawing a bow or still-hunting. Gator Fleece is available in a parka ($195), jacket ($170), pant ($150), gloves ($23) and hat ($40). (800-333-3504; www.browning.com)