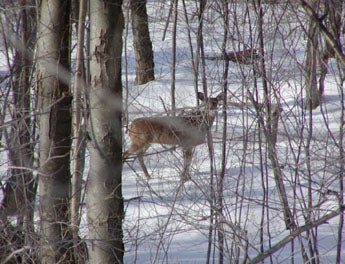 Deer are quickly becoming a mainstream news item. Where once their mention was limited to outdoor columns in sports sections, more stories about incidents involving deer are making it to the front page. The animals are achieving this status by devouring manicured lawns, taking leisurely strolls on major highways and occasionally grazing on railroad track rights-of-way.

The deer nuisance combined with the Northeast’s population density makes controlling the herd size problematic. While a hunting season is usually enough to handle deer numbers in more rural areas, instituting an open season in suburban areas raises obvious safety concerns. Folks don’t want to have to worry about arrows or bullets whizzing by while they’re at work in their gardens.

Enter the United Bowhunters of Connecticut. Founded in 1990 as a lobbying group for bowhunting rights, the UBC has started a program to benefit homeowners and bowhunters alike.

It works like this: If a resident has a deer complaint, he or she calls the local police, who have a list of UBC-certified hunters. A hunter in the area is then contacted to hunt the homeowner’s property during the regular bow season (September 15 to December 31 in most of the state). A team member from the UBC is first sent to the property to determine whether the land is huntable. If so, the hunter can bag his trophy and the resident can invest in top-dollar pansies without worry.

Jim Antippas, vice president of the UBC, says that bowhunters are allowed within city limits but must have written permission from the landowner. The UBC list, though, saves the hunter the trouble of going door-to-door to seek permission. There’s no guarantee that a hunter will be called, but the odds of getting to hunt the suburbs is increased. Getting on the list To become a UBC-certified hunter, you need to pass not only the state-required bowhunting safety class, but also the UBC Advanced Bowhunter Course. The UBC course is more in-depth than the state’s and addresses issues hunters often face in suburban areas. The cost of the class is $20, which includes a one-year membership to the UBC.

The UBC’s Advanced Bowhunter Course is operated by a private organization instead of the state because of the Freedom of Information Act. According to Connecticut deer biologist Howard Kilpatrick, “If a program like this were run by the state, the identities of the participating hunters would have to be open to the public.” Such access could make hunters fearful of harassment from anti-hunting groups.

Antippas stresses the idea that the UBC program is not providing trophy buck hunts. “Our intent is to reduce the deer herd, so we encourage hunters to take the first deer they see.” Big deer are regularly taken, however.