Deer, bears, turkeys...all on one hunt. 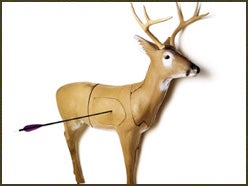 training my eyes to see through the thick brush, I drew my bow. The big 6 by 6 bull was standing on the edge of a natural lane in the underbrush, with just enough of his vitals showing to offer hope. He was 45 yards away. I fought to control my nerves as I concentrated through the peep sight and triggered the release. My arrow disappeared into a window in the brush and I heard a thump as my arrow hit home.

Stepping aside, I smiled at the next shooter in our group. Though everything from the pressure to the darkened woods had seemed very real, the elk was made of foam.

Like many hunters, I can never get enough practice on real animals to gain icy nerves and steady hands. Shooting at a 3-D target bridges the gap between practice and hunting.

Shooting Skills
The advantage of 3-D shooting is its ability to invoke real-time hunting pressure. No one likes to lose, but more importantly, no one likes to embarrass himself in front of friends. Local 3-D competitions can pit friend against friend in a battle for bragging rights.

In fact, often it’s this tournament-within-a-tournament that’s the real source of pressure. The resulting good-natured trash talk might border on the hysterical as everyone tries to gain a mental advantage. Out of this environment comes the ability to handle tough shots under pressure.

Most 3-D shoots are set up with slightly longer shots than you would take in the field. This takes you out of your comfort zone, and will make those 30-yard shots seem much easier.

**Field-Testing **
As you compete under realistic hunting conditions, you’ll figure out the type and number of sight pins that produce the best sight picture. You’ll learn the trajectory of your arrows-what you can shoot over and what you can shoot under. Most important, as you start racking up foam “kills,” you’ll become more confident in your abilities.

**Range-Estimation **
To be a consistently successful bowhunter, you have to be proficient at estimating range. While many people get very proficient at the art of estimating range, few can do it quickly. Real hunting situations rarely afford the time to estimate shooting distances effectively-often in the real world it’s just look, draw and shoot. So when shooting at 3-D ranges, be sure to use a time limit for each shot. This will force you to determine the range fast-5 to 10 seconds is realistic.

Maintaining Composure
Unless local rules require that each group rotate their order from target to target, consider shooting first at each station. Even though this will reduce your score, it will make you a better hunter. You’ll lead off on each target, which adds pressure. And without another arrow to use as an aiming reference, you’ll have to pick a precise point on a featureless surface each time you shoot. Sounds like something you’ll be doing this fall, doesn’t it?