"Truth be known, I often wish I could trade a week in the elk woods for a week in a hardwood forest loaded with...squirrels." 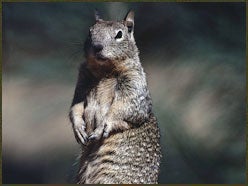 As someone who was born in New York but has lived in the Rocky Mountain region for more than 30 years, I’m often asked if I miss hunting back East. I currently live in northwestern Wyoming, the mother lode of big game, where you can hunt just about every species roaming the Lower 48. So, what’s there to want?

Truth be known, I often wish I could trade a week in the elk woods for a week in a hardwood forest loaded with…squirrels.

Don’t get me wrong. Elk are my passion, but squirrel hunting takes me back to my boyhood days. My first serious experience with squirrels occurred when my father took me hunting on a farm owned by one of his best friends. While sneaking through the woods, Dad spotted a bushytail high up an oak tree. I couldn’t believe he’d seen it; the squirrel was flattened against a branch at least 75 feet up. Dad rested his .22 on a log and cleanly dropped the squirrel with a head shot. I was 12 years old and mighty proud of my pop.

That turned out to be my dad’s last hunt. His farmer friend was killed in a tragic hunting accident later that fall, and Dad gave it up. But that didn’t stop him from encouraging me to hunt and pursue my own dream of becoming a forest ranger. (He also remains a fanatic fisherman. And today, at 84, he still fishes with me several weeks out of every year).

It’s been said that squirrel hunting is the finest prerequisite to big-game hunting. I heartily agree. Practically every strategy for deer hunting comes into play when hunting squirrels, requiring the hunter to see, hear, stalk and shoot accurately. It’s my opinion that the very best way to teach youngsters hunting and gun-safety skills is to introduce them to squirrel hunting.

Tactics are dependent on the area in which you live, as well as the nature of the woods being hunted. Generally speaking, whether you hunt the gray or fox squirrel, you’ll be dealing with three distinctly different seasons.

** Early Season Tactics**
Where seasons open in late summer, you’ll be faced with trees in full foliage, making it tough to see squirrels. However, the bushytails will be extremely active gathering acorns and nuts. In areas where hickory and oak trees grow in the same forest, look for trees with bright yellow leaves. These are apt to be hickories, which commonly turn color before oaks. Squirrels often focus on hickory nuts before they begin working on the acorns produced by oak trees.

Listening is a big part of the strategy when squirrels are feeding heavily. On a quiet day you can hear them husking nuts, and, if you’re intensely observant, you can see bits of shells raining down on the forest floor.

I like entering the woods early in the morning and taking a stand near several mature trees laden with nuts. I remain still and wait until a squirrel appears. If hunting pressure hasn’t been heavy, I’ll let the first squirrel begin feeding and wait for more to appear. These wily animals will often congregate in trees heavily laden with mast. If you’re stealthy enough, you can drop several with little movement. Be still after each shot, since a .22 doesn’t normally alarm squirrels.

If you miss or spook a squirrel, it may race through the tree crowns and make a getaway in the thick vegetation, or it may hide in a branch junction or just lie flat against the tree. Spotting a motionless squirrel in a tree in full leaf can be almost impossible. Binoculars are a must, and be prepared to look for a long time. If the tree you’re searching is overmature, the quarry may have slipped into a hole.

When using binoculars, take the tree apart with your eyes piece by piece. Many times you’ll spot the motionless squirrel by identifying an ear or a tuft of tail fur. This is tremendous practice for locating camouflaged game, and the skills learned now will be invaluable when deer season rolls around.

Mid-Season Madness As fall progresses, squirrels begin storing foods in earnest. Because leaves are largely gone, you’ll see squirrels more easily, but they’ll also see you. Wear camo clothing, and move slowly. Bushytails have good hearing and eyesight and can detect your presence from a distance.

If you encounter a squirrel on the ground beyond your shooting range, stay put and wait until it heads up a tree, and then stalk toward it. If the squirrel spots you and begins running, you can try a force play. To do this, sprint toward the animal to make it scramble up a tree. (Never do this with a loaded firearm.) A squirrel will commonly come to a halt high in the canopy, pressing itself tightly against the bark, and usually facing skyward. The animal now goes on the defense, astutely keeping the tree between you and its position.

If you have a hunting partner, send your companion around the tree while you remain stationary. If you’re alone, try tying a string to a sapling about 10 or 15 feet on the other side of the tree. Get ready, have your rifle positioned and jerk the string violently several times, allowing the sapling to thrash back and forth. The squirrel will often react to this commotion by scurrying over to your side of the tree.

Mast production is cyclic; a bumper crop is usually produced every two or three years. Scout the forest you hunt long before the season opens and study the trees to determine which ones will have large crops. That’s where to concentrate your efforts.