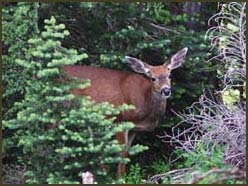 Blacktail deer have the same bifurcated antler configuration as mule deer…they’re just smaller. For example, the world-record Columbia blacktail scored 1822/8 points; the minimum score to make the Boone and Crockett book for typical mule deer is 195. Sitka deer have even smaller antlers: The world-record buck scored 128 points. The B&C; minimum score for Columbia blacktails was recently upped from 130 to 135, while the minimum for Sitka blacktails stands at 108.

The classic trophy Columbia blacktail has heavy bases and beams, four points per side measuring at least four to five inches in length, noticeable eye guards and an inside antler spread that’s at least ear-wide. A whopper Sitka buck will have the same antler configuration but the points will be significantly shorter (about three inches is trophy potential). It should be noted that many large blacktails often have only three points on one or both sides, with or without one or two eye guards–headgear that looks more like a whitetail’s than a mule deer’s. While they won’t score high enough to make book, heavy-horned bucks of this variety are trophy-class nonetheless.