Where legal, these breeds are the conscientious deer hunter's best friend. 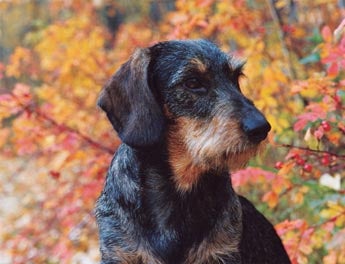 John Jeanneney pulled his trigger on a big doe in Dutchess County, N.Y., but a limb deflected his slug too far back for a clean kill. The blood trail ended after 50 yards, and combing the area all day produced no deer. A week later, two hunters found the spoiled carcass a quarter mile away. That was hard to take for the ethical hunter, who was determined to use every means possible to account for every animal shot. It was 1970, and it was not yet legal to use a tracking dog.

At the time, Jeanneney, a history professor, was breeding wirehaired dachshunds of German hunting stock. He knew the breed was used for tracking in Europe, so he applied to New York State’s Department of Environmental Conservation for a research permit to investigate the feasibility of using leashed tracking dogs to find wounded deer in his state. After much persistence and the intervention of Bill Wadsworth, a pioneer of legalized bowhunting in the northeast, the permit was granted in 1976. Jeanneney would need help, so others were added as “designated agents.” This group became Deer Search Inc., the organization ultimately responsible for the legalization of tracking in New York in 1986. Since then, 11 other states have come on board. Counting those Southern states, plus California and Nebraska, where it was already legal, about 20 states now permit tracking in some form. Rules vary strangely. Even though 25 to 50 percent of wounded deer are found alive, Wisconsin, Michigan and Indiana do not allow firearms while tracking. Illinois allows tracking after dark on private property, but no firearms after legal hunting hours. Jeanneney says about 1 percent of wounded deer will charge a dog and that it usually occurs at night, especially when the animal has a broken leg, not an organ wound.

Reading the Clues
After nearly 30 years of personal experience and investigating how others adapt tracking to their areas, John Jeanneney has written a book on the subject, Tracking Dogs for Finding Wounded Deer. Chapters 11 and 12 alone are worth the price, even for hunters with no interest in tracking dogs. They detail how not to be fooled about where the deer was hit.

Take a broken leg. The hunter may say he found “pieces of rib” and lots of blood and conclude he made a chest shot. But Jeanneney asks whether the deer tried to run, fell once or twice and then took off on three legs. Is the blood bright, as with a flesh wound? Is it distributed in many small droplets? Are there bloody drag marks over branches or logs? With enough yes answers, Jeanneney knows this deer should be tracked quickly to keep it moving and bleeding. If the hunter waits to let it stiffen, the deer will stop. Blood will clot in the bone marrow, where much of the bleeding is happening. If the deer weakens no further, ending its suffering is unlikely.

Jeanneney’s training skills are equally keen. He may start with liver drags, then drop occasional pieces beside the trail. The pup learns there are treats if he hugs the line. Jeanneney knows that later he’ll see more evidence and will understand more about the wounded deer when his dog doesn’t drift off and on the track.

Choosing a Tracker>>
Larger, taller breeds, such as drahthaars,** coonhounds**, curs and cow dogs, are safer in Southern snake country and are most effective worked off-leash, but this requires huge land holdings or leases if the dog is to be seen again. Those breeds and bloodhounds have the nose and voice to track and bay, but a bloodhound’s size and eager pulling on-leash overwork a handler. Labs lack the nose and tenacity of a scent hound but do well if gotten on the track early. In the North, where on-leash is mandatory, small dogs such as beagles and dachshunds are easy to handle, whilee big dogs on 30-foot leashes get hung up in thickets. Wirehaired dachshunds of hunting stock are easiest to teach, smooth-coated dachshunds are second, and hunting terriers or feists are too impatient to stick with the track.