In Part Two, there are more airport security headaches for our man, Colin Moore, as he tries in vain to get to the promised land of whitetails, and take a crack at a champion buck 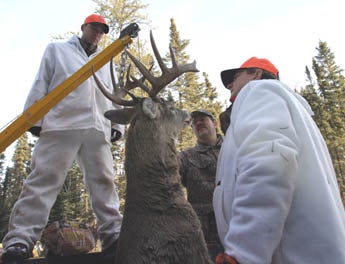 There’s no end to the fun when you fly Air Canada from the states to Saskatoon with a firearm. Getting a crack at one of northern Canada’s _borealis _ whitetail subspecies is the object of the exercise, but we didn’t expect all the airport hurdles we’ve encountered. First, we had lock problems with our gun cases when we left Newark International and, after spending almost two hours clearing customs in Toronto, we flew on to Saskatoon only to discover that our guns didn’t arrive anyway.

In fact, of about 75 guns that were supposed to accompany their owners on the plane from Toronto to Saskatoon, only about a half-dozen firearms actually showed up in baggage claim. No problem, we were old by the smiling lady at the Air Canada counter, the guns would come in on a later flight.

The next morning, after an overnight stay at the Saskatoon Inn, our guns still hadn’t put in an appearance. In fact, one in our group, James Guthrie, lacked his gun as well as his two bags of hunting clothes and equipment. Not to worry, said the phone voice at Air Canada, our missing luggage would arrive in time to join us in a two-hour drive to our destination north of Prince Albert, Saskatchewan. Much to our surprise, she was right, except for the belongings of the ill-fated Guthrie. But the Air Canada folks assured us that they would either deliver the missing gear, or give it to a trailing hunter in our party who wasn’t due to arrive until that evening.

We reached the lodge of Garden River Outfitters by mid afternoon, and after being assigned bunk rooms, unlimbered our muzzleloaders and checked them for accuracy at the range. Mine, a CVA Kodiak Pro in-line equipped with Dura-sight rings and mounts and a 2.5-10x Bushnell Elite scope, put the 275-grain PowerBelt Aerotip bullet dead-on at 50 yards. Having been told by Mo Heisler, the outfitter, that most of the shots we would be taking would come at ranges of less than 75 yards, I figured I was good to go.

Not Guthrie. A late-afternoon phone call from our trailing hunter revealed that Guthrie’s gun had arrived, but Canadian customs wouldn’t release it to anyone but Guthrie. In accordance to Canadian gun laws, the gun user-in this case Guthrie-would have to pick up the gun in person at the airport. Guthrie then left on a five-hour round-trip excursion to rescue his gun from the snatches of Canadian customs.

The rest of us got unlimbered and later enjoyed a hearty dinner prepared by Heisler’s trio of cooks. Two hours later, I’m settled in with my bunk mates, Slaton White and John Phillips, and ready to dream dreams of giant Saskatchewan whitetail bucks. Tomorrow morning, one’s bound to walk in front of my stand.

Did You Miss Part 1? Click Below
Fantasy Bucks, Part 1

**Coming Up: Hunting the Saskatchewan Bush **