Colin Moore finally gets a chance to chase giant whitetails in the Canadian bush country. Will he succeed? 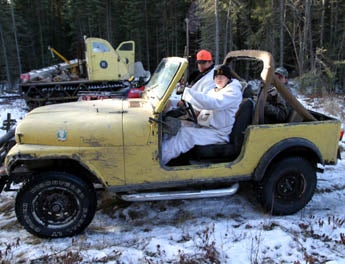 Want to hunt whitetails in Saskatchewan? Here’s the daily drill, or at least the routine at Mo Heisler’s Garden River Outfitters (306-978-2307). I suspect it’s about the same anywhere in the Canadian bush:

[pagebreak] That’s about it in a nutshell. Regardless of the outfitter, the hunting approach is pretty much the same here in Zone 64 near Christopher Lake. Heisler, whose photos with some of the trophy bucks he’s taken over the years wallpaper the den of the hunting lodge, assures us that this is the only way to get a big buck in the bush country, and it’s plain to see why. The woods are so thick that spot and stalk is out of the question, and because whitetails here otherwise survive the winter by browsing on a variety of natural foods, it would be nigh impossible to hunt them successfully without having something to lure them to you. Hence the bait pile, which is perfectly legal in Saskatchewan. Still, John Phillips of Birmingham and I wonder later what it would be like to turn loose a few packs of Walkers in this country. No telling what might pop out.

Incidentally, this huge forest we’re hunting is spread over187,000 acres and adjoins Prince Albert National Park. Canadian hunters can come and go as they please, but U.S. citizens are required to hunt with an outfitter and Heisler has the franchise in these parts. He and his guides put up stands in several different locales and rotate U.S. hunters from season to season so that no particular area gets hammered. As you can imagine, there is plenty of room between stands, and the nearest hunter to me is over a mile away.

The first day is a good break-in period. It’s snowed the whole time and hasn’t been too cold. Before I climbed up the ladder, I didn’t know if I could handle sitting in a covered blind from about 6:30 a.m. until pickup time at 7 p.m., but really it’s not too bad. There’s always something to look at, whether does, magpies or hungry pine squirrels, and young bucks come and go-a couple of which would rank as shooters down South.

In this country, it’s so quiet you can hear a gnat sneeze from 50 yards away, but I don’t hear any shots. Easy to explain: everybody is just shopping the first day and wondering what else is coming tomorrow. Besides 17 does and yearlings, I’ve seen five bucks ranging from spikes to 10-pointers. After leegal shooting time, which ends at 5:45 p.m., a stud comes in to the barley and hay. The two does that are feeding there when he arrives back up in a hurry and skedaddle. It’s too dark to make out any detail in his racks, but when the buck lowers his head to feed, I can faintly make out that one of his main beams has good mass and curves forward to end about even with his nose. Oh, my! Wonder if this guy ever gets hungry in the daytime?

Coming Up: The Colder It Gets, the Hotter the Action