It's cold in Saskatchewan (well below zero, in fact) and the guides seem to think that will get the bucks moving. 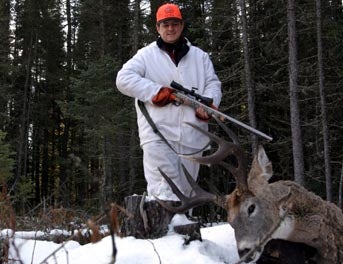 It snowed Monday and the temperature was tolerable, but the Canadian winter really got down to business Tuesday in Saskatchewan’s north woods. At 4:30 a.m. I looked through sleep-deprived eyes at the thermometer mounted on the outside of the kitchen window. Minus 22 degrees Celsius, or minus 7 Fahrenheit. I’ve been in colder weather, but I was moving around and it didn’t seem so frigid. It’s different when you’re sitting in a deer stand for 12 hours, which is the routine here.

I load up on HotHands in various shapes and sizes, put on a base layer of SmartWool crew top and bottoms, follow it with a Filson suit of thicker Merino wool and add a pair of Thinsulate-lined Wrangler ProGear jeans and a thick Woolrich shirt. My boots, Ranger Wyoming pacs rated for 40 below, go on over a pair of RedHead Thermolite liners and Extreme Cold socks. As I’m heading out the door, everything gets topped off with a RedHead Cold Weather System parka and bibs, followed by a white wool parka and pants, per Canadian hunting law, a Servus snowmobiler’s facemask and a pair of Thinsulate-insulated fleece gloves. The good news is that my outfit seems to be cold proof; the bad news is that I can barely move. To get in the back of the minivan, I have to lean to the left and swing my right leg up and over the side door’s threshold. From there it’s just a matter of pulling myself in and rolling over into a half-sitting, half-standing position on one of the seats.

Such foolishness makes me wonder, but Mo Heisler, who runs Garden River Outfitters, says this is prime deer-hunting weather and worth the discomfort. Mo says that any time the temperature dips below minus 20 degrees Celsius, normally nocturnal bucks have to keep moving around and feeding during the daytime to maintain their core body temperature. I think that is a good idea, and propose the same for myself: moving around and feeding. But Mo forbids it; I have to stay in my stand for safety’s sake and hope the bucks come to me.

This business about how the weather affects bucks has led to many a discussion. Some hunters think that bucks move around less in cold weather, preferring to lay up in a treetop and conserve heat. Others, like Mo, believe bucks cruise the neighborhood and eat what they can find so they can load up on heat-generating calories. Probably, the truth is somewhere in between. I read somewhere that northern bucks pig out in the fall and then coast through the winter on the fat they’ve stored.

[pagebreak] That’s in a completely natural environment, though. Outfits such as Mo’s put out piles of hay and barley grain to attract deer, and I’m hoping the extreme cold will result in more visitors, especially the buck I saw last evening several minutes after legal shooting time. Besides, the rut is starting to crank up, as evidenced by the behavior of some of the younger bucks I see

Three hours after I’ve climbed into my stand, I’ve seen 23 does and seven junior-grade bucks. None of them seem too worried about the temperature, but it’s an ongoing concern of mine. My HotHands are serving double-duty now; not only have I got them stuck into every crack and crevice in my coat of cold armor, but I’ve had to put them in my backpack with my bottle of water and sandwiches. I discovered the effects of sub-zero weather on mayonnaise with the first bite of my roast beef sandwich; it’s sort of like crunching down on a Snow Cone stuck between two pieces of bread.

Cold or not, the day goes by surprisingly quickly. I was hoping the buck that I spotted in the dark would return for a daylight snack, but he doesn’t show. In fact, I don’t see any shooters, though the comings and goings of does and lesser bucks keep my feeling of anticipation high. Finally, it’s dark-thirty when one of Mo’s guides arrives to pick me up. When we get back to camp, I discover that Chad Schearer, a hunting buddy and outfitter from Montana, took a toad of a 10-pointer that day with his CVA Kodiiak Pro in .45 caliber. We figure the buck scores about 135 inches. It’s funny; there’s no telling how many mule deer, whitetails and antelope Chad has shot with his rifle, but most hunters think they need a .50 caliber to hunt deer effectively. Maybe they never saw the size of the exit hole a PowerBelt 45-caliber bullet makes when it passes through a 250-pound deer.

One down-Chad’s-and nine to go. When is my turn coming?