After five days on the stand in miserably cold conditions, Colin Moore is about ready to give up on Saskatchewan, the land of giant bucks. 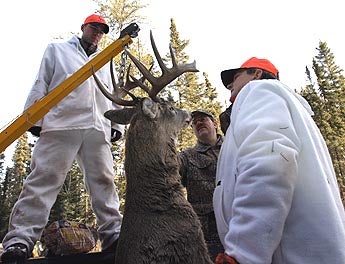 John Phillips saw something on Wednesday morning that few U.S. citizens ever see in Canada: a wolf. While he was sitting in his Saskatchewan deer stand waiting for a buck that never showed, the wolf put in an appearance. John said it was colored sort of like a German shepherd. The wolf loped up to the deer bait pile John was watching, sniffed around a bit, and then moved off a few yards into the underbrush and stood there eyeing the bait with its tongue lolling . After 30 minutes or so, John had had enough. He stood up and fussed at the wolf for several seconds. The wolf looked at John like a cow looking at a new gate, then wheeled around and trotted off.

There are a lot of wolves in this area of Saskatchewan north of Prince Albert. The other hunters and I hear them everyday, though John is the only one to have seen one. Mo Heisler, the outfitter, says that we can’t shoot wolves-period. In fact, nobody in these parts can hunt wolves with guns, though it is legal for licensed Canadian trappers to take them. Heisler collects a dozen or so pelts every winter. As you might expect, he feels no affection toward wolves as they compete with human hunters and his potential customers for whitetails. “A wolf pack will bring down a deer a week, on average,” Heisler told me as he was showing off a buck’s skull with a nice set of antlers. Wolves had pulled down the deer.

I am ambivalent in my feelings toward wolves. If they’re hurting the deer population in these parts, I can’t tell it because there seems to be plenty of whitetails around. I can’t blame a wolf for being born a wolf, but I don’t regard them as some sort of glamour animal either, as is fashionable in various circles these days. Still, as long as the wolves don’t bother me, I won’t bother them.

My real problem is with the deer. Let’s fast-forward and skip the rest of the story about the long, cold days on stand. By Friday evening, five days after the hunt began, I can see the handwriting in the snow: there isn’t going to be a monster buck for me. Sure, the potential for a Booner is there, but these ol’ boys are just as cautious and nocturnally oriented as the bucks are in a highly pressured area such as central Pennsylvania. Five mornings in a row, I’ve seen big, broad-shouldered studs come out to feed in the dark. Five evenings in a row, after legal shooting time, at least one big buck has put in an appearance. It’s almost as if the shooters are wearing watches, however; no matter how hard I wish for one to stay until legal shooting hour begins, or pop out of the woods before dark, it doesn’t happen.

[pagebreak] If I had a choice in the matter, I would change two things about the way I’m hunting based on my observations and experience. First, I believe the bucks know that the free food didn’t just drop out of the heavens and have the stationary stand all figured out. So I would bring a climbing stand next time and go up a pine tree in the general area where the night visitors seem to be heading in the morning, or where they seem to be coming from just before dark. Second, I am confident that the oldest, wisest and biggest bucks have the ATV racket we’re making coming to and from the stand patterened. Next time, I would ask the guide to drop me off on the main road and walk the 200 yards or so in to my stand, rather than driving in on the ATV.

Ten of us went hunting, four of us got nice bucks. The biggest was a 153-inch 12-pointer taken by Kansas hunter Chris Lalik. James Guthrie, from Virginia, tagged a 147-incher and Chad Schearer, from Montana, got a nice 138. My running buddy, Slaton White, killed a huge 275-pound, 8-pointer that scored around 130.

Garden River Outfitters (306-978-2307) charges $3,000 U.S. per week to hunt in the first, fourth and fifth weeks of the season. The price is $3,500 the second and third weeks of the season, and there’s a good reason for it. Those weeks in November coincide roughly with the peak of the rut in Saskatchewan’s Zone 64, and that’s why we went when we did. Chad, Chris and Slaton shot bucks that were actively pursuing does. In fact, Chris first saw his buck chasing does on Tuesday, but didn’t have a good shot until the buck made a return visit on Thursday morning. Fatal attraction.

Guthrie’s buck came into a bait pile to feed, though it probably was trolling the ‘hood for does. I saw a lot of bucks chasing does or walking blindly through the woods with their noses stuck to the ground. A few of these Lotharios would have been shooters in the Deep South where I am used to hunting. I’ve spent a lot of hours in a deer stand, and I’ve shot my fair share of bucks, but I didn’t go to Saskatchewan to shoot something I could have shot in Alabama-and stayed a lot warmer doing it.

Go big or go home. I went home without a buck, but I wouldn’t have traded the experience, and the opportunity to tag one of Saskatchewan’s famous giant whitetails, for any other hunt I’ve ever been on. If I get a chance to go back, I will.