Executive Editor Colin Moore was offered a dream chance to hunt whitetails in northern Saskatchewan. Will he be able to harvest a monster that could rival Milo Hansen's world record? Well, first he has to get through airport security. 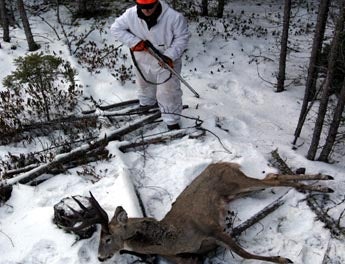 Mention that name in a roomful of deer hunters and everybody thinks of Milo Hansen and his mind-blowing whitetail, the world record that scored 213 5/8 on the Boone and Crockett Club scale. It was killed in November 1993 near the Saskatchewan farming community of Biggar.

When a friend offered me a chance to join a November hunt in Saskatchewan near Christopher Lake, about 30 miles north of Prince Albert, it took me about a half-second to answer in the affirmative. Of course, Biggar is west of Saskatoon, a couple of hundred miles away from Christopher Lake, but I’m not fussy about geography. Besides, the second largest buck in the province, and sixth largest in the records book, came from Zone 64, which is where we’re headed for our get-together.

Visions of bucks as big as steers and sporting a head full of antlers are running through my head as I’m sitting in the Air Canada boarding area at Newark International Airport. By this time, the thought that I might get a crack at one of the giant bucks is all that’s keeping me motivated. At 4 a.m. on a Saturday morning, nothing seems to run smoothly, including the Air Canada baggage handling system.
When hunting buddy Slaton White and I got to the airport, the airline’s baggage handler told us and other hunters heading in the same direction to unlock our gun cases and give him the locks. As we’re waiting for the green light to go ahead through security, however, a TSA officer comes out of the X-ray room and angrily tells the handler to quit sending in gun cases that aren’t locked. “I don’t want them unlocked; let the people in Toronto worry about it,” he says. My gun case finally comes out, and I see that it’s wearing the two locks I put on it before I left home. Slaton’s, however, is lockless. When the TSA guy asks Slaton about the lock, Slaton replies that the Air Canada baggage handler has it. Then the handler checks his pockets and admits he has lost Slaton’s lock (he also locked the keys to another guy’s lock inside his case).

After telling Slaton that his gun case can’t be shipped to Toronto without a lock on it, the TSA officer provides a lock that doesn’t have a key. Guess it got lost, too. Slaton asks the guy how he’s supposed to open the case for inspection at Toronto, and the TSA man says “Don’t worry, they’ll get it off with a pair of bolt cutters.”

Luckily, Slaton finds an airport shop open that sells small luggage locks, and he stows it away in his carry-on to replace the lock that Canadian customs officials are bound to cut off his case.

I hope it gets better as the trip progresses to Toronto, where hunters from throughout the eastern U.S. are funneling through on their way to Saskatoon and points north. Mental note to self: Upon return home, suggest to Air Canada that it educate its baggage handlers regarding proper procedures for hauling firearms post 9/11.