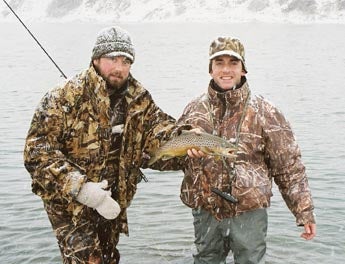 There aren’t too many places in the world where you can wake up the morning after overnight temperatures didn’t climb above zero and float down a river, but Montana’s Bighorn River below Yellowtail Dam is one of them.

Forrester’s Bighorn River Resort (http://www.forrestersbighorn.com///) happens to sit just a couple miles below the Yellowtail. After a hearty pancake breakfast, we wrapped ourselves in untold layers of clothing and headed to the launch for a day of casting to spawning brown trout and blasting migrating ducks and geese out of the air as they coursed along the only open water in the region.

We hadn’t gone a quarter mile before I dropped the first duck, a goldeneye, with my second shot of the day. It was heading upriver as we were heading down. “This is going to be too easy,” I thought to myself, still sufficiently warm after the car ride to the launch.

That was the last duck I shot while comfortably perched in the bow of our guide Ryan’s Clackacraft. And before long the wind picked up. And the snow began to fall. And things weren’t so cozy any more.

Which isn’t to say that we didn’t shoot any more birds, we just had to work a bit harder for them. And, to be honest, I relished those times we would anchor the boat and quietly stalk across an island to jump-shoot a bunch of unsuspecting birds stationed on the opposite side. The walking gave me the opportunity to get the feeling back in my feet.

It was hard to ignore the surfacing brown trout as we floated along, so after a while we traded guns for 5-weights. This proved to be a challenge, though, as the line and reel would freeze and ice would gather in the guides after just a few casts. If we were out there solely to catch fish, I wouldn’t have quit after my first brownie, but pulling a trigger wasn’t as demanding on one’s hands as was unhooking wet trout and releasing them into frigid water or retying broken-off tackle, so my fishing endeavor was short lived. However, Greg Gatto, Outdoor Life’s Eastern Sales Manager, was ready for the challenge and was rewarded for sticking with it with some beefy browns that neared 20 inches.

Three miles into the trip disaster nearly struck when I fell into the river. My left foot got stuck beneath the gunwale as we were getting out of the boats to jump some more birds. Down I went into about 5 inches of water, completely soaking my right side. Luckily, I was able to get to my feet before the water could find its way down my waders. Regardless, I couldn’t bend my right arm the rest of the day as the water had instantly frozen around my jacket sleeve. No matter, that didn’t stop me from gunning a few more birds as we made our way down the beautiful Bighorn.

Our day on the river ended as the sun and temperatures both dropped. We loaded into Ryan’s rig and headed back to the lodge to thaw out with whiskey and a dinner of the partridge and pheasant we had shot the day before. Luckily, I was able to bend my right arm again to bring the fork to my mouth.