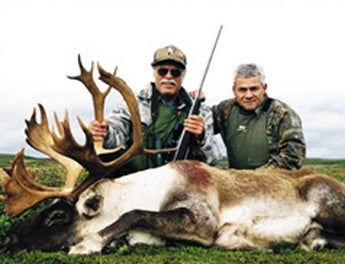 Caribou hunting is always a black-or-white proposition. Either the animals are where you’re hunting, or they’re not. You can be the savviest, most dedicated hunter on the planet, but if the nearest caribou is 30 miles away, you’ll never see one. Each year I talk to disgruntled hunters who “missed” the migration by being either too early or too late.

I’ve been lucky in the North Country. I recently finished taking all five of the caribou subspecies listed by the Boone and Crockett Club (mountain, woodland, barren ground, central Canada barren ground and Quebec-Labrador). I’ve never had a failed caribou hunt, primarily because only one was a “migration” hunt. The rest were for animals that were resident to the region I was hunting in. I’ve hunted caribou from boats, canoes and horses and have taken all manner of bush aircraft to reach remote camps. On my last trip we hunted using ATVs and pickup trucks, of all things.

Return to Newfoundland
My most recent hunt was with an old outfitter buddy, Sammy Cantafio, who runs one of the finest caribou hunts in all of Canada. He’s based in Quebec, where he hunts the Quebec-Labrador subspecies. When I told Sammy that I needed the woodland subspecies to round out my B&C; “slam,” he immediately suggested a hunt with his pal, Jerry Pumphrey, who runs Long Range Outfitters in Newfoundland (866-444-3445, toll free), which is where the woodland subspecies resides.

I had hunted in Newfoundland once before, for moose, in the late ’60s. Four buddies and I had driven up from New York state in pickup trucks. Following a wave-tossed ferry ride from Nova Scotia across the 100-mile Cabot Strait (a hurricane was in full force), I promised myself then that the next time I went to Newfoundland, I’d fly, which is what I did.

Though the camp we were based out of was quite comfortable, Jerry was in the process of building a lovely new lodge, which is now complete. I quickly learned that caribou were plentiful and easily accessible. For three days I rode ATVs and hiked with my guide over ridges of spruce and brush. Some of our treks went across swampy areas, and in spots we hiked out to timbered points to glass vast areas of lush country. We saw animals everywhere, and I opted to pass for a while. I wasn’t looking for a trophy necessarily, but there was no scarcity of caribou. As it turned out, I took my bull after it dashed across a highway in front of our truck. The bull was tending at least 35 cows, and the herd swiftly dashed over a rise and out of sight. I moved quickly on foot to try to cut them off before they reached a distant spruce forest. Luckily, when I trotted around a bend I saw the bull watching some cows that were lingering and put him down easily with my Browning A-bolt 7mm Rem. Mag.

I couldn’t help but be amazed as I reflected on the many hunts on which I’d gone a thousand miles across the tundra to get near a caribou. Not only did I take this animal close to a highway, but I saw at least 200 more from the pickup. Sammy took a nice moose, and the other hunters in camp tagged both moose and caribou. It’s often said that in Newfoundland a combo hunt for each species doesn’t work well, but in Jerry’s camp, that’s not the case.

Not so Big…Or bright
Caribou are not particularly bright. As Jack O’Connor, former Shooting Editor of Outdoor Life, once noted, a spooked caribou is likely to dash away, forget what scared it and run back for another look. I’ve had similar experiences, though I’ve seen the occasional animal that seems genuinely alarmed and will run for its life.

Contrary to some puzzling articles I’ve read, caribou are not overly large. I often hear of 500-pound animals, but I’ve yet to see one. The biggest is the barren ground subspecies, which lives in the Alaska region. I’d estimate its live weight at 300 to 350 pounds. The average caribou across the north is no biggerr than a farm-fed whitetail in Alberta, and most are smaller. Those I’ve taken looked to be about as big as 175- to 200-pound deer. I once took accurate scales on a hunt for the Quebec-Labrador subspecies. The skinned quarters (bone in), averaged 29 pounds. A skeptical buddy went up a year later (carrying scales) and confirmed what I’d learned.

Guns and Loads
Caribou are not tenacious and don’t require big-bore firearms. I’ve taken them with a .270, a .30/06 and a 7mm Rem. Mag. I do suggest hunters take shooting sticks or a bipod, since you’ll likely be hunting open country with nothing to rest your rifle on.

The most important part of your hunt is planning it. Find out if you’ll be hunting a migratory herd, and what the outfitter’s success rate has been over the years. You’ll need to hunt with an outfitter in Canada, though in some provinces you can hunt unguided in drop-camps run by a licensed outfitter. Alaska does not require an outfitter. The bag limit on caribou may be two, depending on where you hunt.

There are exceptions. While my Newfoundland hunt took place in forested areas, most caribou hunts take place in huge, barren lands of tundra and stunted forest. This is an added bonus and one of the reasons I keep going back for more, as it will likely be the most remote hunt you’ve ever been on.