How to hold, grow and funnel super bucks. 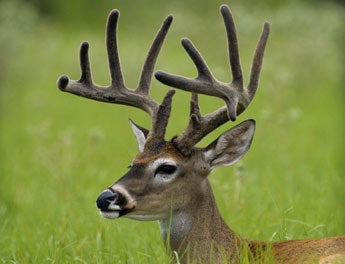 ** Last month we showed you how to alter the playing field to make deer go where you want them to go while creating food sources that will hold deer on your property. To read the article go to: [XLINK 608290] . This month we’re sharpening those tactics even further to reset all of the rules of the game in your favor.

Starting with 250 acres, we asked Neil Dougherty, who works for Mossy Oak’s BioLogic and is one of the brightest young deer-woods architects in the country, to lead the way. After studying the habitat and winds on our tract, Dougherty showed us where to build a few roads and cut huge swaths of timber. He helped us lay out a major food plot to attract whitetails and spur antler growth. And he showed us where to position sanctuaries strategically across the property so that our land would hold a sizable number of does and bucks.

Now it’s time for Phase Two of our management plan.

We’re ready to plant roadbeds and designer feed patches. We’ll fertilize some mast trees. We’ll fire up our chainsaws and further sculpt the woods to create more deer browse and cover. Finally, we’ll get to the best part of the entire process: We’ll hang a few tree stands so we can watch and hunt the bucks we’re raising.

Keep in mind that the whole concept hinges on a couple of things: 1) No matter what the size of your land is, you need to provide more high-quality, year-round food and cover for deer than surrounding landowners do; and 2) each fall, you need to hunt your property more intelligently than your neighbors hunt theirs. If you do these two things, you’ll have the most deer, the biggest bucks and the best hunting for miles around, says Dougherty.

**A. Sweeten the Mast ** Some foresters say whitetails will seek out bumper crops of sweet, fertilized acorns over all others. Dougherty isn’t so sure about that, but he figures it can’t hurt to treat a few mast trees in spots that might be ripe for hunting next fall. So we’ll fertilize some thick, healthy white oaks on the north-central ridge, where bucks are sure to travel when trolling for does during the rut.

The acorns will drop downwind or crosswind of the thickets and food plots positioned to the west. On September and October evenings, when deer move a few hundred yards east from the sanctuaries to fatten up on the nuts, they’ll be on the upwind side of the treated oaks-and upwind of our nearby stand. To spread the candy around, we’ll also treat a few red oaks in the southwestern bottom. We won’t fertilize randomly or too much. We’ll try to select mature trees that are within 25 yards or so of good bow-stand sites. Fertilizer tablets, spikes or packs are more convenient for the job than loose 5-10-15.

While you’re fertilizing mast trees, scour your property for small, hidden fruit trees, like the wild apples we found in the southwestern corner near the main food plot. Tune up the production of soft-mast trees by pruning limbs and fertilizing. “Most years they’ll make some fruit just in time for bow season,” Dougherty points out.

B. Boomerang-Shaped Food Plots We’ll build two of Dougherty’s “Boomerang Bushwhack” plots in and around the aggressive timber cuts we made in Phase One. This will give us an awesome mix of green plants, regenerating native vegetation and security cover in these areas. What more could a whitetail want? The plots will be only a half-acre or so in size with a north-south configuration.

We’ll hang stands on the east sides of the plots. We’ll doze 60-foot windrows or huge brush piles behind the stands to keep deer from coming in downwind and busting us. We’ll construct obstacles on the upwind (west) sides of the plots to funnel does and bucks into the feed. We’ll plant an annual that grows lush frrom late summer through mid-fall. Dougherty recommends we also sow BioLogic Maximum in August in one of the plots. The tall, leafy New Zealand brassica plants, which have 34 to 38 percent crude protein, are our land manager’s favorite for attracting and nourishing bucks after the rut. “Deer won’t use this plot until the starch in the brassica plants turns to sugar when it gets cold in December,” he says. “But then you’ll have a great late-season hunting spot.”

[pagebreak] C. Living Brush Piles One of Dougherty’s innovative ways to create yet more deer feed and cover is with “living brush piles.” Check out the ones that rim the logging road on the east side of our property. To make them, we sawed into 3- to 6-inch trees and shrubs but didn’t cut all the way and sever them from the stumps. We sawed through the trunks just until the tops toppled over. The trees will live at least one or two years and will provide abundant and reachable browse for deer.

“The closer you position a plot to the thick stuff, the higher the chance that a mature buck will show up in the plot during daylight hours,” Dougherty says.

Dougherty’s favorite signature plot is his “See-Through Hourglass.” He recommends a pair for our tract on the west side. Both plots are less than one acre and are necked down to 30 yards in the middle. The plan is for deer to walk into the plot’s neck, where they can see both ends of the plot. This will make them feel safe, so they stay and feed. To make that happen, we’ll pile some trees and brush that we bulldozed and cut when building the plots on the upwind side of the necks in the plots; these barriers and edges should direct and funnel some animals into the center. Also, because some old does and bucks will try to enter our plots with their noses in the wind, we’ll build windrows 60 to 70 yards long directly behind our main hunting stands to block the deer and force them in on an upwind side.

Dougherty suggests we sow these plots about 45 days before the fall’s first frost with a fast-growing annual attractant to maximize deer traffic to our plots before the rut begins.

**E. Roadside Eats ** Once the loggers finished the aggressive timber cut through the heart of our woods in Phase One, we had them grade most of the nearby interior roads. Now we’re rolling in with our ATV, plowing and seeding those roadbeds and edges as if they were food plots.

“Planting a thousand yards of road is equal to putting in a one-acre food plot,” notes Dougherty. “And deer will walk right down them. Wherever they pass you, they’ll be in bow range.”

Logging roads are already open and easy to access, so sowing them with a high-quality perennial is a no-brainer. For roads, Dougherty recommends a clover blend. The long strips of clover should grow for four or five years from April through August.

Greens tend to grow best on north-south roads that receive three to four hours of sunlight each day. “But plant as many roads as you can for maximum food tonnage and to create edge habitat for your deer,” says our architect. If your roads are too narrow and dark, hire someone with a bulldozer to widen them by 10 to 15 feet in places. This way lush clover, blackberries, greenbrier and other forage will sprout up on the edges. (You might as well fertilize that stuff once a year, too, with 10-10-10.) The pushed-over trees will provide both whitetails and hunters with more hiding cover.