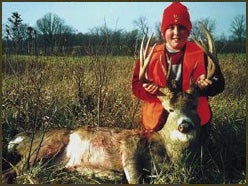 A buck the color of burnt charcoal ghosts through the winter woods with an inch of fresh snow frosting its spine. Very little body heat escapes through the whitetail’s coat, so the icing on this buck’s back might not melt at all. Before the sun peeks over the horizon, the titan wants to get into a warm, wind-free stand of conifers. Meanwhile, just outside this thick tangle of evergreens, you’re waiting with one more buck tag in your pocket.

The above scenario can happen if you hunt what I call “thermal cover,” groves of conifers or cedar that hold in warmth like a blanket.

**Deer and Winter Cover **
For most of the year, whitetails utilize security cover, which biologists identify as trees, saplings or brush capable of screening 90 percent of a standing deer at 75 yards. But when the mercury plunges in December in Northeastern and Midwestern states, does and bucks shift their movements to utilize thermal cover: groves or swamps of cedar, spruce or hemlock. Studies show that conifers cut wind speed by 50 percent or more. The ambient temperature inside a pine or cedar thicket can be 10 to 15 degrees warmer than it is in nearby hardwood timber.

Some biologists say that 5- to 40-acre sections of thermal cover are best. There’s good shelter for some deer, but not enough cover for many deer, which can quickly over-browse a habitat.

In states such as Illinois, Iowa and Kansas, where it gets darn cold but not as bitter as it does up in northern Minnesota or New England, whitetails often seek out different kinds of thermal cover. During the day, many deer bed in south-facing ravines or on slopes where the cedars are spotty but not too thick. The animals want some sunlight to hit them. Some bucks bed out in tall grass, weeds or brush where they can see well, but they do so only if they can stay completely sheltered from the bitter northwest wind.

**Hunt the Feed **
You can close in on hot cover by simply analyzing the late-season food sources in an area. If there’s little or no feed within half a mile or so of a conifer block or swamp, few, if any, deer will stay there for any length of time.

Dave Streb, with Quaker Boy Game Calls, hunts deer till the bitter end in and around his home state of New York. Streb hunts a lot of big public areas, such as the Allegheny National Forest in Pennsylvania. He concentrates on old mast crops or recently logged areas with lots of woody browse. “If you can find a hemlock swamp with big oak ridges above, or a new clear-cut within a quarter-mile or so, you’ll find deer,” Streb points out.

Pull an Ambush
A few years ago Don Kisky of Garden Grove, Iowa, hunted a double-drop-tine buck. It was cold that December, the kind of cold that hurts. The buck was feeding on a corn plot; Kisky waited there each evening, but it never showed during shooting light. It was smart.

But so is Kisky. One afternoon he sneaked back into a ravine in the direction the buck was coming from. At twilight he looked up and shuddered; the buck was walking straight to him. Kisky’s muzzleloader belched smoke and the huge buck went down. That hunt taught Kisky a lesson we should all learn. “Don’t get caught up hunting over a food source. A lot of old bucks hang up back in cover until dark.”