From Wolves to Dogs

How some of the enemy became our best friends. 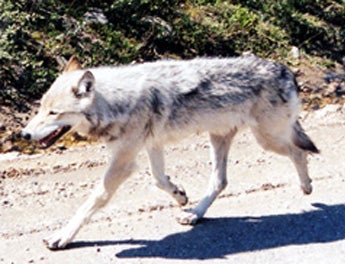 Dogs are wolves in pup’s clothing, descendants of ancient gray wolves who not only adopted humans voluntarily but became instrumental in civilizing them. At first it was a loose relationship, with wolves getting leftovers and easier living and us getting cleaner camps and warnings of approaching danger. The friendship tightened a bit as wolves began trailing us to kills to feast on innards and scraps.

The real partnership evolved when wolves grew impatient with our slow gait and raced ahead to quicken the kill. Help from their sensitive noses, highly evolved instinct to drive herds and ferocity in pushing animals over cliffs or into canyons shortened the hunts and gave us time to think about things more advanced than what was for dinner.

By this time (around 100,000 B.C.), gray wolves were 2 million years old and had spread over much of the world. Subspecies had evolved in size and behavior to match regional hunting opportunities. Humans not only prized these canine hunting skills, but also obviously liked puppies. This is evident from the role neoteny (arrested infantile development) played in the change from wolves to dogs.

selecting for traits
Genetic mistakes, or mutations, can result in permanent changes, for better or worse. For instance, a mutation stopped baby blue eyes from maturing to brown in some of us. In puppies, floppy ears might never become erect. Perhaps a coat remains silky. Or shorter legs and muzzles might remain shorter. But the most important puppy trait arrested by early man was dependence. A respect for strong, intelligent leaders was already fundamental in wolves’ social structure, so they easily became members of our “pack.” But puppy dependence turned wolves into dogs that preferred us to their own kind. Dogs are the only domesticated animals that will seek out humans if they’re lost or abandoned.

While dog development was a slow and accidental result of selecting for novelty or puppy characteristics, it was also our introduction to deliberate selective breeding. When early man saw that mating dogs of like traits reproduced and strengthened those traits, changes came fast. Herd animals could be domesticated when selective breeding strengthened the northern European wolf trait of shepherding prey. The lighter, swifter Asiatic wolves in Arab lands became coursing hounds. Egyptians hunted antelope with wolves until they developed more manageable dogs in the Twelfth Dynasty. Asian wolves from forested areas of Tibet and India produced dingoes and stockier mastiff types that became war dogs. Increasing trade and travel gave rise to experimental crosses of dogs with regional skills. Greyhound/shepherds gave us pointer types. Shepherds mated with smaller descendants of Asian wolves from China probably produced spaniels and terriers. Greyhound/ mastiffs provided most scent hounds, and mastiff/pointers led to retrievers.

genetic split
Many evolutionary details are lost or remain undiscovered, but a three- university comparison of wolf, coyote, jackal and dog DNA makes it clear that most dog genes came from the gray wolf family. Based on the “molecular clock” (average number of mutations per lifetime), wolves and coyotes became separate canines about a million years ago, creating a DNA difference of 71/2 percent. The dog/wolf difference is only 1 percent, which they say makes the dog separation about 100,000 years old.

The math is quite loose, making the estimate more than 33,000 years on the conservative side. But that’s wise considering man’s involvement. Our propensity toward novelty probably accelerated the molecular clock by reproducing and perpetuating mutations that couldn’t have survived in the wild.

Interestingly, about 100,000 years ago was also when gray wolves spread southward after having lived in Alaska for 800,000 years