X-Rays of the Rut 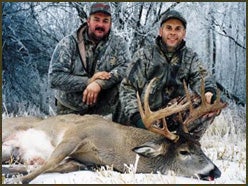 The fall woods can be a very confusing place. Bucks are running rampant in search of does, and fresh scrapes and rubs can be found in bottoms, along field edges and on ridges. All of which can make picking a stand both thrilling and daunting. Midwinter is different. Last year’s rut sign is still apparent. The leaves have fallen, shrunken, dried and grayed. The forest is open and terrain features are as obvious as bones in an X-ray. Picking stand locations in winter is easy. But I had to learn this the hard way.

A Lesson Learned
I was kicking myself one October when the muzzleloader season was nearing and I wasn’t sure where to hang my stands in an area I hadn’t hunted before.

With the season a few days away, I had to play it cool. After a quick check of the mast crop, thickets and doe trails, I hung a tree stand overlooking an oak hollow above a beaver swamp. After hunting the stand on and off for a month, I observed 38 does and 9 bucks. One of those bucks was a monster. Hot after a doe one morning, he rumbled off a ridge and into the swamp, way out of muzzleloader range. All I could do was sit and gawk at his 10-point rack, which had beams as thick as ax handles.

After each day, I scribbled details about deer sightings in a notepad I stash in my pack. I marked the good buck in red, noting the direction from which he came and where he went.

Finding the Hot Spot
The following February I returned to the stand. I scouted a half-mile to the east but didn’t find much sign. I pressed on, and 300 yards to the west I found the place to be. Was I mad at myself. Two muddy doe trails intersected on a ridge. I stopped counting at 50 rubs. Bucks had pawed scrapes all over the joint. I checked my journal. Things jibed. About 70 percent of the deer I had spotted the previous fall had been off to the west. The sign, so obvious now, would’ve been hard to spot after spring greenup. I found a tree on the ridge where a northwest wind would be right and marked it with orange tape.

A Second Chance
The 20th animal I spotted from my new post the following fall was a buck, a good one. It wasn’t the heavy 10-pointer I had glimpsed the previous season, but I didn’t care. I pulled the trigger; smoke plumed into the air and the 8-pointer fell 70 yards away.

The moral of the story: Chances are you hunted at least one new spot last fall. If so, you ought to go back and do some follow-up scouting. Do it now, when the woods are still open.