10 Ways to Get a Wall-hanger

Follow these guidelines if you want to tag the buck of a lifetime. 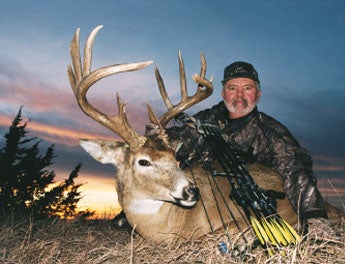 You fill your tag just about every season, but why are your bucks almost always small guys? Is it because they don’t grow very big in your hunting area, or is it because you tend to settle for whatever comes along? Here are 10 steps you can take to finally put your hands around that thick, gnarly trophy rack you’ve always wanted.

1. Be sneaky
You might have the best stand spot in the woods, but it’s worthless if you spook the deer before you get into it. Analyze a potential stand site before you set up. How are you going to reach your stand without alerting a buck in the neighborhood to your presence? Choose spots where prevailing winds will blow away from the most likely approach routes of deer. Select areas you can enter quietly and from a direction where the wind won’t blow your scent toward approaching bucks. If necessary, clear a path to the stand by removing brush and logs that could make noise or trip you.

Allow enough time to walk in at a slow, halting pace. Park far away. If a mature buck hears a truck’s engine, car doors slamming or people talking nearby, or sees a flashlight slicing through the trees, he won’t travel in that direction. Arrive at the stand 20 minutes before first light so the woods can settle down around you.

** 2. Pass on Young Bucks**
If you can’t resist the urge to pop the first young legal buck that saunters past your stand, you’ll never take a brute unless it’s by accident.

If you kill young bucks where you hunt year after year, few will remain to grow into true trophies. And if you tag out early in the season just because you can, you won’t be on stand when a larger buck goes by later in the season.

Another reason to pass up junior bucks is that the first deer to walk down a trail or venture into a clearing is usually a youngster. Older bucks normally follow only after they’ve seen that the coast is clear. I’ve watched groups of up to a dozen bucks show in a field toward dusk. The biggest bucks appeared last.

** 3. Play the Wind**
You can walk slowly and quietly and sit as still as a statue all day, but the effort is wasted if a mature buck smells you. As soon as he gets a whiff of you, the buck is going the other way.

No matter how badly you want to hunt a certain location, stay away from your stand if the wind is wrong. Also, be scrupulously clean when you enter the woods. Wear scent-absorbing clothing and use scent-eliminating sprays. Avoid strong-smelling foods and brush your teeth first. Yes, deer can smell bad breath.

4. Take a hike
Hunting in areas that are convenient to reach-and therefore probably crowded with other hunters-won’t get you a big buck. The average deer hunter parks his truck and hikes 200 yards into the woods. He avoids steep, rugged areas and spots where there is no convenient place to leave a vehicle close by. This concentrates pressure in narrow bands near roads, where bucks either move away from the human intrusion or hunker down in available cover and become nocturnal until after the season is over.

The solution is simple. You have to go to some trouble to find the lairs of the biggest bucks. Put on your hiking boots and strike out for spots most hunters ignore because they’re too far, too steep, too swampy or too thick. Topographic maps and aerial photos will help you find such areas. Get in early and be waiting when the roadside hunters stumble in at first light, sending bucks fleeing your way. **

5. Hunt big-buck country**
Quantity or quality? In most cases, you have to choose. If you want numbers, expect low body weights and spindly racks. If you want older bucks with heavy racks, head for regions with lower population densities. Another plus of low-density areas: fewer hunters and less pressure on bucks. Most hunters want to see lots of bucks and think their chances are better where ppopulations are high. However, you’re not interested in numbers; you just want to see that one monster buck that comes by close enough to present you with a high-percentage shot.

[pagebreak] 6. Scout Properly
In many ways, scouting is the real hunting. Waiting on stand is when you reap the rewards of your earlier hunting efforts. Yet many hunters avoid scouting until just before the season.

The best time to do most scouting is at the end of the previous season, from January through March. Check out all areas you were interested in but didn’t want to disturb because you were afraid to bump bucks onto neighboring land. Use topo maps and aerial photographs and walk every inch of the property in addition to exploring new terrain to decipher patterns of deer movement and plan your strategy.

Follow up with a few midday scouting forays in early fall. Watch fields from a distance with binoculars to see where bucks are entering from adjacent woods or fencelines.

7. Avoid Bedding Areas
If you’re lucky, you have an area with thick, steep, swampy or otherwise hellish cover on the property you hunt. In all likelihood, it’s part of a mature buck’s core home range. It’s tempting to hunt right up to the edges or even bust the deer out and try for a quick shot at him.

Don’t-you’ll regret it. If you hunt on a small to medium-sized property and you push a mature buck out of his prime bedding spot, he will become totally nocturnal or be shot by another hunter as he flees. Treat bedding areas as sanctuaries and go in them only once a year to look for sheds.

On occasion, we make the opposite mistake. We hesitate for a split second and then any opportunity is gone. We’re not sure if the buck we’re looking at is big enough, then realize just what a trophy he is when our buddy in the next stand brings him into camp at the end of the day.

Study, study, study. That’s the key to this one. Watch videos, read books and articles and become a keen judge of deer age and antler score. Look at bucks in taxidermy shops, estimate the scores by calculating in your mind, then ask the shop owner what the deer actually scored. It’s a good exercise.

**9. Don’t Quit Too Soon **
It’s tough to stay immobile on stand for 12 hours. Because of that, many people hunt hard from dawn until around 10 a.m. and then take a break. Wise old bucks learn this pattern and know they can move freely from midmorning until midafternoon.

Another reason to hunt during midday is that deer have several natural feeding times, and midday is one of them. Finally, if you’re on watch from 10 a.m. to 3 p.m., other hunters leaving the woods and coming back after lunch will often jump bucks, sending them running past your location. And if you’re hunting during the rut, you’re liable to spot a big buck looking for does at any time of day.

10. Hunt the Thickets
It’s fun to sit where you can see hundreds of yards in all directions, but rarely will you find mature bucks traveling through such areas in daylight.

Thick hollows, brush-choked saddles, dense stream bottoms-these are the spots to hunt, not the open fields and pretty, parklike woods.