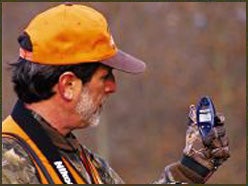 I t’s happened to you: On those days when you just know the deer will be moving throughout the woods, they don’t. Despite being in your best stand on a morning when everything about the weather seems to be perfect, a deer never comes within view. Nothing is stirring in the woods except the breeze.

Wouldn’t it be nice to discover the “switches” that start deer moving in the woods and keep them going? Then we’d know which days to hunt, which days to work and perhaps even which tree stands to sit in. It was this pursuit that led me to Grant Woods, PhD, one of the nation’s foremost whitetail research biologists. What I hoped would be an elementary question for someone of his background ended up being anything but simple. Our telephone discussion was enlightening, although not in the way I expected.

What We Don’t Know

“What is the switch that triggers the short-term spikes in movement I see only a couple of times each fall?” I asked. When Dr. Woods began chuckling on the other end of the phone line, I knew I was in for an education. “I only wish I knew the answer,” he replied. “I feel safe in saying that no one knows the answer to that. It’s the puzzle many deer researchers are working to solve. Over the past several months I’ve been doing some very interesting research using GPS receivers attached to deer collars. After studying that information I have to eat some of the things I’ve preached for years. Predicting movement is much more complex than I thought.”

For one thing, Woods now believes that deer react to imminent changes in weather patterns that they detect with their heightened senses. These changes won’t occur for 24 to 48 hours, but when the conditions are right, deer are driven to feed. “We’ve tried all the simple correlations-barometric pressure, the moon, weather conditions-and none of them have shown any degree of accuracy,” says Woods. “We just don’t have the right kinds of data yet that will show exactly what combination of factors deer are sensing, but I’m sure the answer is out there. This is an exciting time to be involved in deer research.”

Parts of the Puzzle

We are probably still years from predicting the exact conditions that trigger brief spikes in movement. Maybe we’ll never know for sure. Yet that’s part of what makes each day of hunting special in its own way. Anything can happen at any time, but you have to be present to win.