Hunting the biggest buck in the woods takes the right game plan. 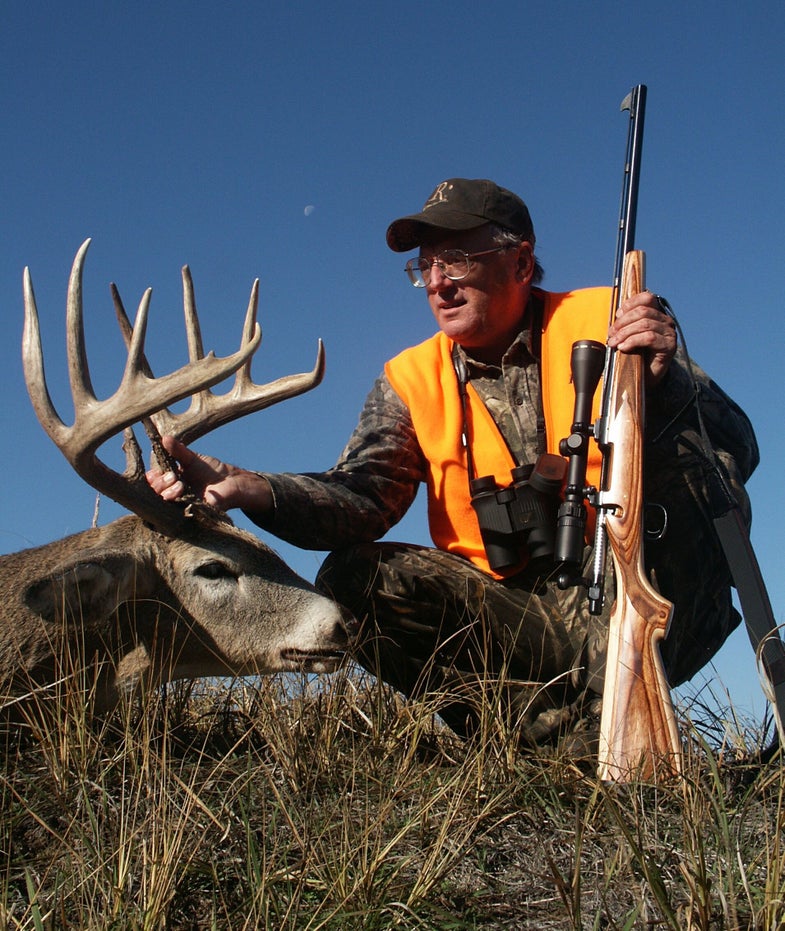 You’ll never shoot a big buck if you aren’t hunting where he lives, but there are definitely trade-offs involved when you decide to go one-on-one. My hunting buddies and I face this dilemma each season. One of us invariably becomes obsessed with a big buck and hunts it single-mindedly until the season ends — almost always without success. In the end, we are sorry we focused on one deer, but the temptation of a big buck sometimes can be too much to resist.

I’ve fallen victim to the spell cast by big antlers myself. I almost gave up the entire bow season in 1995 trying for a big 10-pointer that I saw only once. For the next four weeks, nearly every afternoon, I hunted the general area where I thought he would be. Finally, I gave up just in time to salvage the season and take a different buck on another part of the farm.

Apparently I don’t learn very fast, because it was only a season later that I did the same thing again. While I was hunting out-of-state, I became obsessed with a giant 12-pointer that stayed in a sea of switchgrass most of the time. My friend who lives nearby and a local school bus driver had each seen him a few times. They said he was tremendous.

I think I saw the buck the first evening at about 200 yards through a freezing drizzle, but during the next week and a half of exclusively hunting the fringes of the field I never saw him again. In fact, I never saw another deer the whole time. I went home with an empty tag and a vow on my lips: “I won’t become obsessed with one deer again.” Two strikes are enough; I’m not likely to swing for the fence again any time soon. I enjoy seeing and shooting lesser deer too much to stake a whole season on bagging a monstrous buck.

It makes more sense to pick a good area and come up with a solid plan to hunt it. Be happy to shoot any buck that meets your minimum standard. Based on the high number of hunters who take a giant buck the first time they see him, the odds are still good that you can shoot one of the best bucks in the area even if you aren’t specifically hunting him. I’ve done it twice now — totally by accident. This possibility adds an extra element of excitement to any hunt.

Concentrate on one buck if you like, but go into the process with your eyes wide open. You may end up taking him, but it’s very likely you’ll focus too much effort on too small of an area and educate every deer around. That’s the first major step toward ending your season without tagging anything.

The Challenges
Trophy deer get old because they’re very good at figuring out when they’re being hunted. Consider this analogy: I studied engineering in college. In one of my material science classes we discussed “destructive testing.” In a destructive test you attempt to learn all you can about a material, but in the process you destroy it — perhaps pulling it apart to see how much stress it can withstand. In many ways, traditional scouting has the same effect.

Each time a buck encounters human scent in his “safe area,” he becomes less inclined to remain there. This is the reason why the first time you hunt a stand almost always produces the best action. All mature bucks have sanctuaries where people seldom go. More than likely, this will be where they spend most of their daylight hours. If you start milling around in such a hideaway, you can bet the buck you’re attempting to pattern there will move out.

You may feel that you need to scout heavily to pattern a buck, but too much scouting at the wrong times and in the wrong places actually can impact the behavior of the buck you’re trying to pattern. Recognizing this and adjusting your approach will make your scouting efforts less destructive.

Whenever possible, avoid areas where whitetails bed. Stick to the cover fringes and places where deer are accustomed to encountering human scent. Do as much preliminary work as poible by referring to aerial photos, engaging in long-range surveillance and talking with local landowners. You can learn a lot about a buck, and the country where he lives, without ever walking into the timber. However, in the end you may feel the need to take a closer look. Here’s a word of caution.

The Trouble With Patterning
Rarely will you be able to put the puzzle together based on buck sign alone. This is the approach that too many hunters take. A hunter sees a rub line and immediately is convinced that it had to be made by the big buck he is hunting. Realistically, the odds are slim. Unless you’re hunting in an area with a really low deer density (in the range of 5 to 10 deer per square mile), there are usually too many bucks around to determine which made what sign.

Even big rubs offer little in the way of information. I’ve seen some small bucks rub some fairly big trees. Anyone who saw the resulting sign, without the benefit of my eyewitness account, would immediately proclaim that the resident monster made the rub. Up goes the stand, and down goes the success rate.

Tracks — specifically, really big tracks — are the only sign that can be reasonably predictive of a big buck’s whereabouts. One of my friends took a giant that he had been hunting for three years because he recognized the buck’s huge tracks on the soft shoulder of a secondary road. He knew from experience that the buck liked to stay on an island in the swamp when he was in that area. It was only after the hunter realized the buck was in the neighborhood that he took the chance to hunt the island. He was rewarded.

Though there are always exceptions to every rule, relying on sign alone is a poor way to try to pattern a buck. There are so many forces acting on his daily life (hunting pressure, the rut, changing food sources) that sign is temporary and of marginal value. Also, bear in mind that some mature bucks don’t leave much behind except tracks when they move around. In fact, in my experience, it’s the young bucks that are the most active and the most likely to leave lots of sign.

The Missing Pieces
Patterning a buck must go beyond locating and attempting to interpret his sign. The terrain and cover where the buck lives have a huge influence on his travel patterns. As long as a mature buck is moving during daylight hours you can bet he’ll be using terrain and cover to his advantage. When you learn how deer use these features you will have enough information to fill in the holes left in the puzzle of buck sign.

Classic examples of terrain-related travel routes include saddles, shallow-water creek crossings and draws leading out of heavy timber into a feeding area. Here’s an example of how terrain fits into the patterning process: Erosion has cut a deep ditch into a timbered slope. Unless pushed hard, bucks won’t cross the chasm, but will go around it. It’s pretty simple stuff, but this kind of understanding can help you take a wall-hanger.

Cover features also offer valuable insight. For example, I often hunt narrow fingers of timber and brush. These features make great deer highways that even mature bucks will use when on the move. Generally, cover-related travel routes are the classic hourglass bottlenecks that you read so much about — narrow spans between larger blocks of cover. Break lines where open cover and thick cover meet, and brushy fence lines spanning open fields, are also common cover-related travel routes.