Outsmarting whitetails sometimes takes something from up your sleeve. 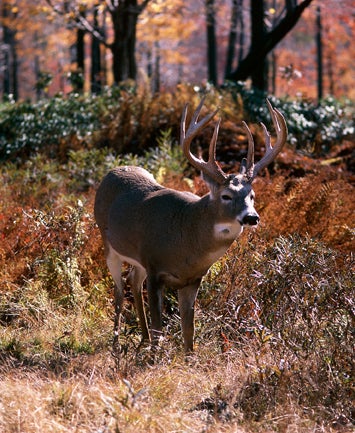 Now that all the anticipation and planning is over, and the hunting season has begun in earnest, it’s easy to fall back into your old hunting habits. They might not be bad habits, and hunting the same way year after year can deliver impressive results for some hunters. On the other hand, you could be making the same mistakes over and over again without even realizing it. Whatever your hunting habits, consider trying a suggestion or two among the following tips. The result might be an unprecedented success; at the very least, your next day in the woods will be a little less routine.

Feeding Binge: It’s no secret that changing weather conditions affect deer movement patterns; the trick is anticipating how to take advantage of those relationships. One consistent pattern is an increase in deer feeding before a storm arrives. What’s the definition of “before?” Whitetail activity around food sources is often at its highest when the barometric pressure is between 29.80 and 30.29 inches of mercury.

The “Rutting Moon”: The second full moon after the autumnal equinox cues the rut in the northern portion of North America, causing bucks to enter a rutting frenzy. This year’s rutting moon will appear on November 1. That means that from November 3 to November 10, bucks north of the 35th latitude should be in the chase phase of the rut. The prime breeding phase of the rut will occur from about November 7 to November 21. Keep in mind that things like human pressure, skewed doe-to-buck ratios (greater than three to one) and unseasonably warm weather can suppress daytime rutting activity and create the illusion that the rut is not occurring.

If the gun opener in your state is in mid-November, it will be the prime breeding window. Look for the bucks to be with the does. If the gun opener is closer to the end of November or the first of December, hunting could be tough because the rut will be winding down. If you’re in the latter group, food sources and bedding areas will be your best targets. But because nearly every gun opener in the North occurs in November, the key for the vast majority of hunters is to focus on doe groups.

The Southern Rut: Due to a host of factors, it’s more difficult to predict the timing of the rut in the South. If you hunt south of the 35th latitude, consult your state biologist to find out whether your area traditionally has an October, November or December rut. Then it’s simply a matter of looking to that month’s full moon to determine when prime rutting behavior will begin.

Pressure Points: On opening day you might consider taking a stand in a natural funnel, such as a stream crossing or a bench on a wooded hillside or in a narrow valley. Bucks have a tendency to escape hunting pressure by moving through these areas when the first volley of shots rings out.

Stay Put: On opening day, strive to stay on stand all day or, at the very least, until 1:30 p.m. Statistics show that the majority of deer killed in highly pressured regions are taken on opening morning. When other hunters are pushing deer around, it’s always best to stay where you are.

Sneak In and Out: When you leave your stand, still-hunt your way out of the woods. Move slowly and stay focused. A good rule of thumb is to take two steps and then stop for a minute to carefully survey the surroundings before moving on. The best still-hunters travel at a snail’s pace.

Loop Still-Hunt: If you have the patience necessary to still-hunt bedding areas successfully, and the terrain you target is rolling or ridgelined, you might try a strategy called “loop still-hunting.” The technique is simple. Working parallel to a ridge, still-hunt as you normally would just below the ridgeline and poke your head over the top every 75 yards to see what might be bedded on top or just over the back side. Bucks love to bed along ridges, and this strategy can provide an opportunity to get a quick shot at a bedded deer. If turkeys are resident to the area and you know how to use a diaphragm call, let out a couple of yelps every so often. A little turkey music will sometimes fool a deer into thinking that the approaching animal is a turkey rather than a human.

A Track’s Tale: Teach yourself to identify the sex of a moving deer by looking at its tracks. Because a doe’s front shoulders and hindquarters are similar in width, when a doe walks on flat ground her back hooves will usually fall directly into the tracks made by her front hooves. A mature buck’s chest, on the other hand, is much wider than his hindquarters, so his hind hoofprints usually fall slightly short and to the inside of the front hooves.

Buck or Doe?: It’s fairly easy to identify the sex of a deer by the bed it leaves behind. Urine spots in the center of the bed indicate a buck left the sign. Urine on the edge of the bed usually means a doe. I always carry a small tape measure with me so I can measure the size of a deer’s bed. Generally speaking, the beds of fawns are around 40 inches long, the beds of does and yearling bucks are about 45 inches long and the beds of mature bucks are 50 inches or longer.

Follow His Lead: When you’re tracking a buck, move at the same pace as he does. If the tracks indicate that the deer is running or walking fast, then you need to do the same. When he slows, your pace should come to a crawl and you should begin looking for body parts and antlers ahead and to the sides.

The “Cloverleaf”: Drive-hunting can be a foolproof strategy for the opener–it’s the one tactic that is unaffected by weather or the timing of the rut. One of the best two-man drive techniques is the “cloverleaf.” One hunter positions himself as a watcher in the heart of a known bedding area (either in a stand or on the ground). Meanwhile, a second hunter makes large loops around the watcher. When it’s viewed from above, the trail left by the hunter making the loops resembles a giant cloverleaf, with the watcher in the middle. The watcher has the benefit of the driver pushing deer by him from several different directions.

The Blind Drive: Another tactic that works well when two to four people are hunting a contained woodlot is the “blind drive.” Each hunter, or pair of hunters, begins still-hunting into the woods from opposite directions, slowly working toward each other. When a deer is jumped, it will usually run only a short distance before stopping. And because both hunters are creeping along, one will often hear the deer coming and be able to prepare for a shot before the deer ever knows they’re around. One warning: It’s extremely important that participants in this drive wear plenty of orange and are absolutely sure of their targets before firing.

Where Rattling Works: Use rattling as part of your hunting strategy if your gun opener falls during the chase phase of the rut (in mid-November). Before you begin tinkling the horns, make two or three doe bleats (which sound like “neeeah”) to add more authenticity to the sequence. Then rattle aggressively for about five minutes, breaking up the sequence with two 30-second breaks. The first and last two hours in the day are the best times to rattle. For safety’s sake, shy away from the technique if you know other hunters are in the area.

Gruuunt!: Next to your firearm or bow, a good grunt tube is the most valuable piece of equipment you can own. It’s important to master five sounds: the fawn bleat, the doe and buck bleat, the doe grunt, the mature buck grunt and the tending grunt. All of these calls can be picked up easily with a little practice using an instructional tape or video.

One of the calls, the tending grunt, is lethal when the breeding phase of the rut arrives. A tending grunt’s cadence resembles a ticking sound (several grunt tubes on the market are designed to simulate the call). When a buck is with a hot doe and another buck tries to intrude on them, the dominant buck will often make a tending grunt that will last anywhere from 20 seconds to two or more minutes to let the other buck know that he’s not welcome. The tending grunt is my call of choice when I encounter a buck during the breeding phase of the rut, because it sends a message to the animal that there’s a hot doe nearby.