Savvy whitetail watchers have been proclaiming the Great Plains’ trophy potential for years. Kansas proved their hunch, and Oklahoma is... 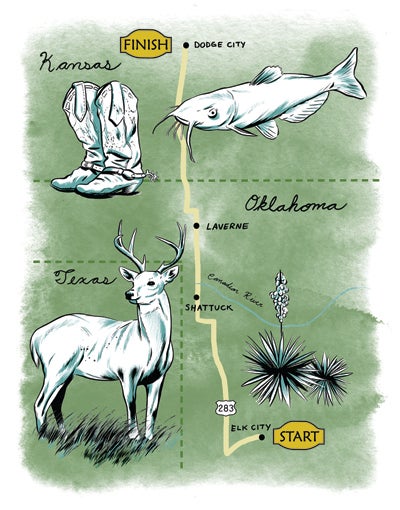 Savvy whitetail watchers have been proclaiming the Great Plains’ trophy potential for years. Kansas proved their hunch, and Oklahoma is close behind. This is still a land of small towns, big ranches, and abundant public parcels, where finding a place to hunt is relatively easy.

U.S. Highway 283 traipses through this borderland, connecting Dodge City, Kansas, with Elk City, Oklahoma, and crossing two legendary rivers–the Cimarron and the Canadian–and Dust Bowl towns where drivers still wave to each other.

Begin at Dodge City’s Boot Hill Museum, a bawdy reminder of gunfighters and brothels and the wide-open cow country you’re about to hunt.

Just past the Oklahoma border, camp at the Cimarron Bluff WMA near Buffalo, where you can fish for bluegills and largemouth bass or hunt turkeys, quail, and whitetails.

As you head south on 283, wet your whistle in Laverne. The Main Street Soda Fountain in the town’s historic district will quench your thirst and leave you some spending money for bait, which you’ll want to sink for double-digit channel cats in the South Canadian River. The state’s

End your hunt on the 31,000-acre Black Kettle National Grassland. Big open-country whitetails get the headlines, but quail, doves, turkeys, and cottontails are all present in good numbers.

You can recover over a smoked burger at The Hog Trough in Elk City, recounting your weekend and its reminder that these are great plains, indeed.