A look at how—and why—six different companies are providing the world's outdoorsmen with American-made sporting equipment. 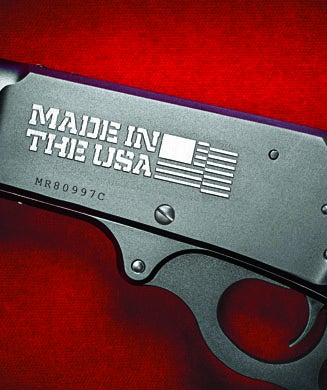 Over the last century, as the United States has shifted away from being a nation of producers and has become a nation of consumers, the manufacturing of goods sold by American companies has, in large part, gone offshore and taken countless jobs with it. Nearly everything we buy today is made overseas, including a lot of our sporting goods.

However, there are still a number of hunting and fishing equipment manufacturers who are bucking the trend and keeping their operations here in America. We look at how–and why–six different companies are providing the world’s outdoorsmen with American-made sporting equipment. We also take a road trip through the Northeast–which, despite its prohibitive gun regulations, is still the epicenter of firearms manufacturing in America–and take a look at the modern state of the country’s gun industry.

For America’s gunmakers, business has never been better. So why are so many of them unsure about what the future holds?

The voice from my GPS declared I’d arrived at Beretta’s Maryland factory, but instead I was sitting in the parking lot of a single-chair barbershop. To my left was a small dirt road paralleling a six-lane thoroughfare that leads commuters to Washington, D.C. As I dug around for a map, the barber stepped out and asked, “You lookin’ for Beretta?” I nodded and he pointed with his scissors down the dirt road.

A short while later I was in the gunmaker’s bustling factory, straining to hear Richard Grimes, Beretta’s director of manufacturing operations, shout over the hum of CNC machines. “We have shifts working around the clock. The machines never stop making guns. We can’t keep up with orders.”

The day before I visited Beretta, I was a few miles away on Capitol Hill, where politicians were debating whether to ban modern sporting rifles (what some erroneously call “assault rifles”). While there, I sat down with Chris Cox, executive director of the National Rifle Association’s Institute for Legislative Action. When I asked Cox about the political challenges facing American gun manufacturers today, he said, “Anti-gun politicians have been trying for decades to put America’s firearms manufacturers out of business. They want to hold honest entrepreneurs, along with law-abiding gun owners, responsible for the acts of criminals.

“The passage of the Protection of Lawful Commerce in Arms Act in 2005 was a vital first step toward ending the anti-gun lobby’s attempts to bankrupt the industry through reckless lawsuits.”

But challenges remain. Cox explained that instead of trying to create good policy that would help stop murderers, some lawmakers are intent on using this emotionally charged time to legislate their anti-Second Amendment ideology.

With this in mind, I headed over to Beretta. If you’re wondering why I would begin a road trip to America’s gunmakers at an Italian-owned factory, my answer is simply that, unlike some major American gun companies who import firearms from overseas, Beretta is making guns in America. And not just Px4 Storms and other handguns; they’re now making the A300 Outlander semi-automatic shotgun in Maryland. Why? “We wanted an American-made shotgun,” said Matteo Recanatini, Beretta’s web and social media manager. When I asked if labor costs or politics might prompt Beretta to move to a more gun-friendly state, Recanatini replied, “Beretta invests in people. We have a skilled workforce here in this very ‘blue’ state, so we’re staying and investing in the future.”

An executive of a major firearms company in Connecticut, who wished not to be identified, told me, “We get calls all the time from officials in other states trying to woo us to the West or the South. They offer lower taxes and cheaper labor costs, but we’ve been here for generations and are committed to staying.” When I asked if new gun control regulations that Connecticut was debating at press time could force him to reconsider the offers, he allowed, “We could be forced to move.” (Some gun companies are already moving. Creedmoor Sports, Inc., announced in February that it is shifting all of its operations from the regulatory stranglehold of Oceanside, Calif., to Anniston, Ala.)

Trying to Keep Up

Modern technology has made manufacturing easier and more streamlined, and this has allowed gun companies to remain in less-than-friendly business climates. “It takes a lot less training for workers to run the CNC machines, and the quality is consistently top notch,” said Beretta’s Grimes. Workers make parts by following photo guidelines fixed to the machines.

When I asked if the sophistication of the automation has resulted in a shrinking workforce, Grimes said, “Not necessarily. Our sales are way up. But we can’t find enough qualified engineers. All the new products and tweaks to the process take a lot of know-how from skilled engineers.”

Mossberg still has a busy plant in North Haven, though 90 percent of its guns are made in a plant it opened in Texas in the 1980s. Gunmakers in general still do a lot of business in Connecticut. According to the National Shooting Sports Foundation (NSSF), firearms manufacturers there generate $1.75 billion in economic activity annually and employ more than 7,300 people.

“We’re busy and we’re hiring. We can’t find enough engineers,” said Joseph Bartozzi, a senior vice president at Mossberg, as we toured the facility. He cited several factors that are saving and even revitalizing American manufacturing. Engineers often do a better job of innovating and improving products when they can also get hands-on experience on the shop floor. Skyrocketing oil prices have driven up shipping costs for overseas products. Low natural-­gas prices in the U.S. are helping to decrease some manufacturing costs. CNC machines and other advancements are making it more affordable per employee to manufacture in the U.S. Meanwhile, labor costs in many countries, including China, have been rising.

Another benefit of making guns here is that companies can staff themselves with hunters and gun enthusiasts who are in touch with the robust U.S. marketplace. According to the ATF Annual Firearms Manufacturing and Export Reports and the U.S. International Trade Commission data, of the more than 8.4 million firearms available for consumer sale in the U.S. in 2011, more than 5.5 million were produced in the U.S.

After leaving Mossberg, I spoke to Larry Keane, senior vice president of the NSSF, which is based in Connecticut. Keane pointed out that the common narrative used to explain today’s robust gun sales is only partly true. You’ve probably heard that the political firestorm involving AR-style rifles is causing gun sales to surge, and guns have certainly been selling.

But the surge didn’t begin when Barack Obama first ran for and won the presidency in 2008. From 2002 to 2011, there was a 54.1 percent rise in background checks called in to the National Instant Criminal Background Check System (NICS). In 2005, there were almost 9 million NICS checks. In 2007, the number pushed past 11 million. It surpassed 14 million in 2009, and then shot past 16 million in 2011. (It should be noted that not every check results in a sale. Some people are denied–keeping criminals from buying firearms is why we have this system–and others simply decide not to purchase a gun.)

So why have gun sales been increasing for more than a decade? The answer lies, at least partially, in the growing national tolerance of guns. In 1959, some 60 percent of the American public favored handgun bans, according to a Gallup poll, whereas in late 2012, 73 percent said they oppose such bans. The percentage of women gun owners in America has risen from 13 percent in 2005 to 23 percent today.

Challenges Ahead
Farther up the road, Smith & Wesson, founded in 1852, is still making its iconic handguns and other firearms in its Springfield, Mass., plant. Not far away is Savage Arms, a company that went bankrupt in 1988. Its turnaround began in the mid-1990s, after Ron Coburn, previously of Smith & Wesson, took over and the company began to develop innovative technologies like the AccuTrigger.

Remington Arms still makes Model 870 shotguns and other firearms in its factory in Ilion, N.Y., where it was established in 1816. Big Green has found itself on particularly shaky ground of late, thanks to gun-­control politics. After the shootings in Sandy Hook, Conn., last December, Cerberus Capital–a private-equity firm that owns Remington’s parent company, Freedom Group–announced a fire sale. At press time, they were trying to sell Remington, Bushmaster, Marlin, and their many other gun and ammo companies.

The vulnerability of the brands being sold under duress by Cerberus prompted an op-ed on CNN.com that called for New York City mayor Michael Bloomberg, billionaire business magnate George Soros, and others to pay “whatever it takes to acquire control of the Freedom Group” and then, if a “moral turnaround” of the gun companies doesn’t work, to commit “corporate euthanasia” of Remington, Marlin, and other Cerberus brands.

That’s a toxic climate for gun companies that serve America’s hunters and shooters, sell firearms to the police and military, and employ thousands of Americans. There are now more than 100 million American gun owners, according to the NRA. Gun ownership has been rising for decades; violent-­crime rates have been declining over that time.

It’s clear that right now, the only dark cloud over America’s gunmakers is of a political nature.

From the May 2013 issue of Outdoor Life magazine.