A Cut Above: Everything You Need to Know About Axes and Hatchets

Axes and hatchets are among man's oldest and most versatile tools. From splitting firewood to breaking down an elk, there isn't much these venerable icons of the outdoors can't do. 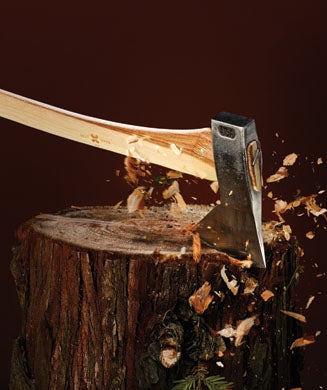 “Beans are in the grocery box. Spuds are in the tent. And if you use my hatchet, don’t let it touch the dirt.”

That was the backwoods tercet that Max Gauthier delivered as he laced on his pac boots in the flickering light of our campfire. It was two hours before daybreak, and my guide was going to find our horses. A pack of wolves had been harassing them all night, so they could be anywhere in about 500,000 acres of British Columbia wilderness. “I should be back in a couple hours,” Max said as he shouldered his rifle and stepped out of the firelight.

That was the first time I had seen Max without his hatchet, a worn Gränsfors Bruk Scandinavian Forest Axe that he lashed to the port side of his saddle and used for limbing trees, clearing deadfall, quartering my moose, pounding tent stakes, and even chopping up a frozen hunk of bacon. I finished my coffee and looked at the shag-barked spruce rounds stacked nearby, Max’s Gränsfors buried in the yellow heartwood of the largest round. It was ready to work.

The hatchet—like its bigger brother, the ax—is an essential outdoor tool. It shines at blazing trees, sharpening sticks, notching logs, and splitting kindling. A good hatchet will have a pounding head that can drive stakes and crush gravel.

Hatchets don’t excel at splitting big rounds of tight-barked wood, but the task consumed me, and I was down to my shirtsleeves before the sun came up.

Then it happened. As I was swinging it down, the hatchet slipped and struck the wood a glancing blow. The blade bit hard into the stony soil. I inspected the edge and found a tiny nick.

When Max dragged in with the horses an hour later, I confessed my sin. He studied his tool, scowled, then glanced at the mountain of firewood I had made. If he held a grudge, he kept it quiet. “Let’s saddle up and go after a caribou,” is all he said. But he never loaned me his hatchet again.

Axes and hatchets are among man’s oldest and most versatile tools. From splitting firewood to breaking down an elk, there isn’t much these venerable icons of the outdoors can’t do. Here’s how to use ’em:

Anatomy of a Tool
4 Unique Ax Heads and the Jobs They Do
Our 10 Favorite Short Axes, Hatchets, and Tomahawks