Double Up On Doves

Use these four expert shooting tips for when the sky is full of birds. 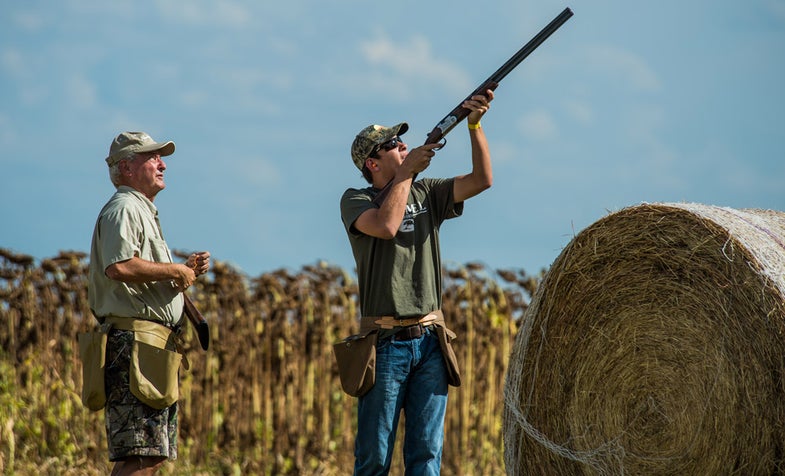 A double on doves is one of wingshooting’s ultimate accomplishments. Pro shooter Bill McGuire tells how to drop two birds when the opportunity arises.

1. Shoot the first one first
Even though there are multiple birds in the air, you have to be focused on one, McGuire says. Lock in on just the bird’s head—or its eye or beak, if possible. Then stay with the bird long enough after the shot so you can see where it lands. That not only ensures you’ll recover it, but also that you’re maintaining sharp focus through the shot.

2. Soften the gun mount
McGuire suggests keeping the gun mounted on the shoulder between shots, but softening the connection to the face.

“After I shoot that first bird, I’ll ‘relieve’ my face—I raise my head and kind of un-shrug my shoulder to clear my vision,” he says. “I will leave the butt in the shoulder pocket to minimize room for a mistake with the second gun mount.”

3. Move eyes before hands
To hit the second bird, start the transition with your eyes.

“Eyes always have to lead our hands,” McGuire says. “Most people set up and look at the first bird they’re going to shoot and pull the trigger, then their hands and eyes try to go to the second target at the same time. You’ve got to separate this into two separate actions. Eyes first, then hands.”

4. Pull away on bird No. 2
Rarely does the second bird afford the same amount of time for you to get in sync with its flight line as the first. McGuire adjusts by using a pull-away move.

“You’ve got to get your muzzles closer to the target,” he says. “I work just off his beak to get connected with the bird and then pull the muzzle away to establish the lead for the shot.”

Tip: Get a Clear View
Shooting glasses have two advantages over ordinary sunglasses: better impact resistance and the ability to swap lenses based on the conditions. The Ranger XLW interchangeable lens system is one of the best, but the company recently released an even better model. The Ranger Falcon ($349) uses a shield-style single lens with no center connector, so there’s nothing to block your vision. The kit comes with three colored lenses.