Deer of the Year: Ghost in the Hardwoods

It’s a frustration unique to deer hunting: The buck of a lifetime, whose image you've caught on trail camera, simply vanishes. What do you do? Mark Sharp could only hope for a miracle. On November 8, he got one. 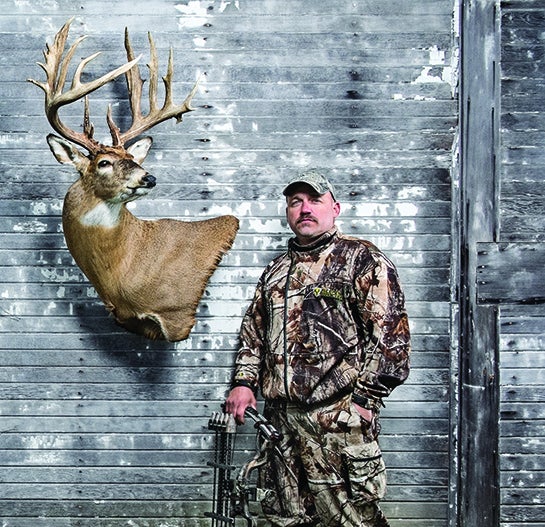 Mark Sharp likely believed his trail camera had captured an apparition, a whitetail ghost that haunted one particular stretch of hardwoods on nights with a north wind. In five years, only a few photos of the giant buck had been captured on trail cameras. Not a single hunter had seen the buck in person. Ever. At least, not until Sharp, a 41-year-old taxidermist from Washington Courthouse, Ohio, decided on a whim to hunt this exact stretch of woods on November 8 of last year.

“I almost didn’t go. It had been a lousy season and I was a little frustrated and tired from working all day. But I called my brother-in-law to talk about what we had seen, and he convinced me to go,” Sharp says.

Big Boy (the nickname given to the ghost whitetail, which, based on game-­camera photos, had at least 14 points and tremendous mass) hadn’t left the corner of Sharp’s memory.
“Honestly, though, I thought that deer had died. Nobody had seen him. There were no recent pictures of him. It was almost like he had never existed. Regardless, I decided to hunt the stand we had set up for him and hope for a miracle.”

The stand was situated on a hardwood ridge between cornfields, with a small creek separating the land Sharp was hunting from a neighboring property that was posted. As luck would have it, the crops on both sides of the ridge had been harvested that morning, which would have run all the deer bedding in the crops to the sliver of woods. 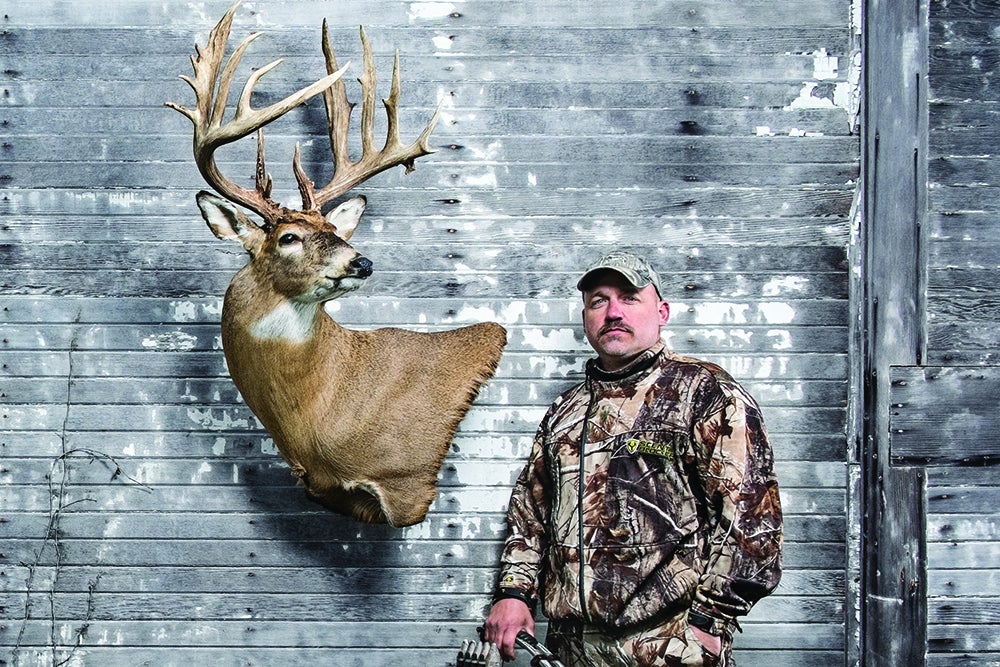 “After making a mock scrape and setting off a Buck Bomb, I climbed into my stand. After about 45 minutes, I saw movement to my left. I looked through my binocular and saw just the tip of the left main beam of a deer. Based on the mass, I knew it was a mature buck. Then the deer stepped out. My heart jumped up into my throat. It was Big Boy.

At this point, the buck was 80 yards distant—on the wrong side of the creek.

“I grunted at the deer, but he didn’t budge. I thought there was no way I would get a shot.”

Then the giant buck crossed the creek and started meandering toward Sharp.

SUBMIT YOUR OWN BUCK TO THIS YEAR’S
DEER OF THE YEAR PROGRAM. ENTER HERE.

“He got to about 60 yards and I used a [doe bleat] can call. He heard it. He took another couple of steps and caught a whiff of the scent. He walked toward me. At 40 yards, I saw him start curling his lips, and I knew he was going to give me a shot,” Sharp remembers.

Big Boy walked to within 22 yards of Sharp’s tree.

“I didn’t have a freakin’ shot! There were some small limbs in my way. I thought I was going to have to let him walk!”

Then, the deer heard something at the base of the ridge and turned, giving Sharp one small opportunity.

“Once he turned, quartering away, there was just one small hole I could shoot through. I had surreal focus. It’s hard to explain, but when I squeezed off the shot, it was like the arrow flew in
slow motion. I not only watched it hit the deer, but I saw blood shoot out of the exit wound.”

The good news was that Sharp had made an excellent shot. Based on the blood trail, the arrow had passed through both lungs. The bad news was that the buck had crossed the creek to the neighbor’s property, a neighbor who didn’t like hunters.

“I was sick to my stomach. I called the area game warden to see if he would help me get the deer, but he was out of the county. So, I went home and waited for two hours, then I drove over to the neighboring landowner to see if he’d let me retrieve the buck,” Sharp recalls.

“You know I don’t allow hunting,” said the landowner. An interminable pause followed. “Just this one time.”

They were the most beautiful words Sharp could have heard at that moment. Elated and full of adrenaline, Sharp, along with his father-in-law and brother-in-law, went back to his stand and followed the blood trail. Big Boy had gone just 15 yards beyond the creek before collapsing.

As the Editor’s Choice winner of the 2014 Deer of the Year contest, Mark Sharp will receive a Yamaha Camo EF2000iS Generator.