Deer of the Year: It Takes A Village 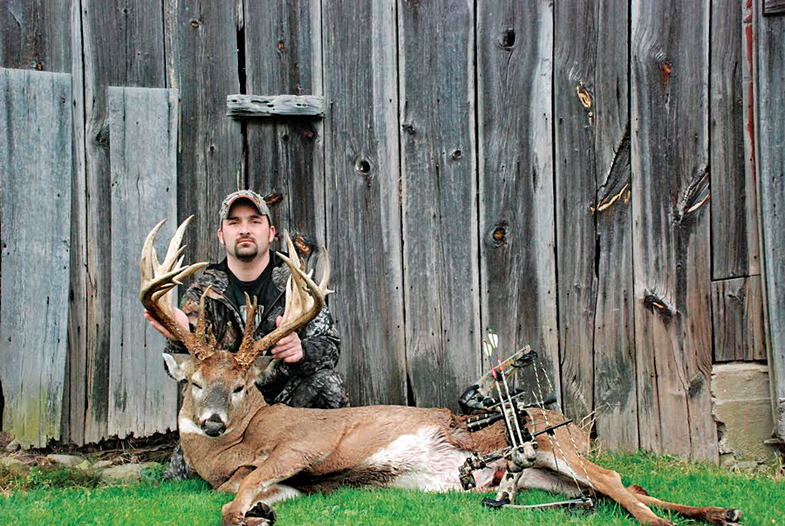 So how exactly do you go about bowhunting a buck that virtually an entire county full of hunters is aware of? If you ask Shawn Evangelista, it takes equal parts cooperation, trail camera reconnaissance, and a bunch of luck.

By the time bow season opened last fall, most of the serious bowhunters in Ashtabula County, Ohio, knew there was a giant in their midst. Hundreds of trail camera photos of the 24-pointer existed and four hunting buddies, Evangelista, Gordon Brail, Dave Allen and Bill Trump, had decided to join forces to take him. As the season drew near, the group agreed to share any and all information about the buck.

“We had something like 10 trail cameras out on several different properties, and we actually started to try and pattern him beginning in December and January the season prior,” says Evangelista. “It was a group effort.”

When the plethora of cameras failed to provide solid information on the big deer’s whereabouts last summer, Evangelista felt it was time to shift his scouting focus.

“I thought I needed to move south,” he says. “I picked up permission to hunt on a newly logged property and kept moving cameras to get a photo of him in hard antler. In retrospect, that new property was the key. But by now he was beginning to get spotted by people in the county.”

Meticulous about his big-buck hunting efforts, Evangelista refused to hunt his newly minted thicket stand unless conditions were perfect. Virtually all of his hunting was done by camera and binoculars, but on November 16, the southeast wind that he had so desperately waited for arrived—as did another hunter, just 75 yards from where Evangelista wanted to set up. His scent was blowing directly into the nearby tangle of cover.

“Honestly, I wasn’t going to hunt,” says Evangelista. “But I talked to Dave on the phone and he suggested that I just use the other to hunter to my advantage. We had a group text going on, joking back and forth, when I heard a twig snap. Now, I’d never seen him other than on trail camera, but it was him—no doubt.”

And the huge buck was skirting around the stand in an obvious search for does.

“I’d trained myself to quit looking at horns, but I’m just trembling,” he says. “He’s pushing 40 yards and I tried to stop him, but couldn’t. I knew I’d never see him again.”

With his shaft chattering on his bow rest, Evangelista let fly—and he watched as the lighted nock on his arrow disappeared into the buck’s chest.

“He took two hops and started walking,” he says. “Then he’s just standing there and suddenly he just fell. I was on the phone with Dave when the deer just fell over.”

It took a group effort to take him and a group effort to get the big buck out of the woods. The 24-pointer, estimated to be 5 ½ or 6 ½ years old, field dressed at 178 pounds. He was scored at 225 5/8 inches by measurers at the Ohio Deer and Turkey Expo.