Use Regional Data to Locate Waterfowl This Season

Near-record duck populations are expected this fall, but drought conditions will redistribute them. Photos by Donald M. Jones (left) and... 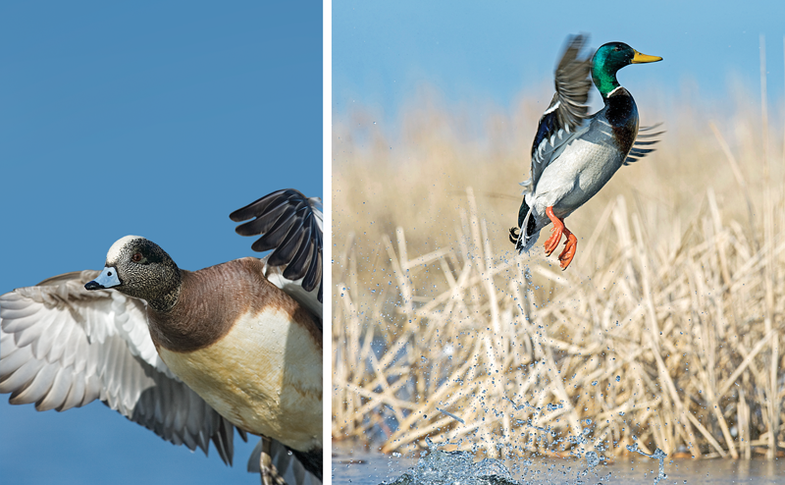 Near-record duck populations are expected this fall, but drought conditions will redistribute them. Photos by Donald M. Jones (left) and Fred Greenslade/Images on the Wild Side (right).

Spring surveys suggest an epic fall flight is under way, but just where those birds end up depends on local conditions. Especially the availability of water.

According to breeding-­ground data from the past several years, we’re living in the greatest duck-hunting era in history. But as various wits have declared: Lies, damn lies, and statistics are among the three greatest untruths told. And statistics, especially those derived several months ago, are particularly problematic for duck hunters.

May surveys that assess bird numbers and habitat conditions stoke expectations of fall abundance, but the picture can change drastically over the ensuing months.
“First, hens need to lay a clutch of eggs, which need to survive and hatch, and the chicks need to survive,” says Dale Humburg, Ducks Unlimited’s chief biologist. “The breeding data and harvest data, in general, correlate very well. High duck production tends to correlate with high harvests.”

Changing Conditions
But as you break down the numbers between flyways, regions, and states, variations begin to emerge. Here are the main factors that will make or break your duck season.

Variable #1: Duck Production
Dry conditions on the breeding grounds don’t just correlate to lower bird production, they have an even greater impact on your overall season. “If it’s dry and gets drier, you might see less overall production,” says Humburg. “That’s important because the number of young birds directly relates to hunter success. In a dry year, the migration will be dominated by smart, older birds.” And those birds are much harder to kill than young, naïve ones.

Variable #2: Drought Impact
A handful of states—Louisiana (with an annual harvest of 2.76 million birds in 2012), California (1.5 million), Texas (1.49 million), and Arkansas (1.3 million)—are responsible for a big percentage of the national waterfowl harvest. Poor habitat conditions in these states equates to lower overall harvests. And this year drought affects the southern end of the Pacific and Central flyways. California is in the grip of exceptional drought. Parts of Texas will similarly have precious little waterfowl habitat.

Variable #3: Number of Hunters
The number of ducks winging south is just half the harvest equation. The other part is the number of active hunters.
It takes a lot of hunters to shoot a lot of ducks; one reason Louisiana ranks near the top of annual harvest is that so many hunters flock there. But if hunters suspect bird numbers are down or redistributed, they may not hunt as often as they normally would.

A Bird’s-Eye View
It doesn’t matter if the sky blackens with a billion ducks. If your hunting area is less than ideal, birds will keep heading south in search of better habitat. “Most hunters are local, and their lens is local—a couple hundred mile range,” says Humburg. “Ducks are hundreds of feet up and very mobile. They can find the best and safest spots.”
And if they don’t find food and water, then those birds are likely to keep moving until they do. Whether that benefits or handicaps you depends entirely on where you hunt. Our map at right suggests some of the best spots for this fall’s flight. 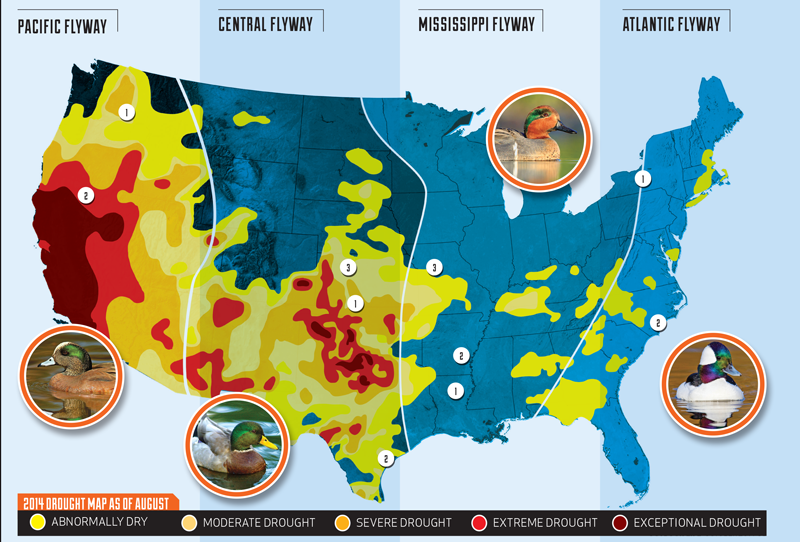 Pacific Flyway
1. Moses Lake/Potholes Reservoir, Washington
Flying under the radar, Washington is consistently a top-seven harvest state, and nearly 30 percent of the bag comes from this area in the middle of the state.

2. Little Dry Creek, California
Nestled in the Sacramento Valley, this is the best waterfowling unit in the Upper Butte Basin WMA, which contains nearly 10,000 acres of pumped and natural water, rice fields, sloughs, and seep from the Sacramento River. It’s one of the finest wetlands in the nation.

Central Flyway
1. Kaw WMA, Oklahoma
With 4,000 acres of milo, wheat, soybeans, and corn, waterfowl have plenty of high-carb options to go with the 2,400 acres of planted millet on this 16,000-acre public spot. The Arkansas River guides the ducks into Kaw Lake and the small-grain buffet.

3. Cheyenne Bottoms WMA, Kansas
This 20,000-acre area is part of a 42,000-acre land sink that creates the largest marsh in the interior U.S. Pump stations allow water levels to be controlled precisely. Pools are drained, burned, disked, and then planted with millet and wheat.

Mississippi Flyway
1. Boeuf WMA, Louisiana
There are more than 50,000 acres of public hunting in the greatest duck-hunting state in the U.S. Bottomland hardwoods and wetlands frequently flooded by the Boeuf River and Bayou Lafourche complement backwater lakes, sloughs, bayous, and brakes that waterfowl love.

3. Grand Pass Conservation Area,
Missouri This 5,000-acre tract of Missouri River bottomlands and wetlands contains a mosaic of marshes and wet prairies. The waterfowl magnet holds more than 150,000 birds during the late season.

Atlantic Flyway
1. Montezuma Wetlands Complex
Nestled between Lake Ontario to the north and abutting Cayuga Lake to the south in west-central New York, these 16,000 acres of public land comprise a state WMA and National Wildlife Refuge. The Finger Lake provides late-season diver hunting before freeze-up for scaup, redheads, and canvasbacks.

2. Ace Basin, South Carolina
This 40,000-acre mixture of public and private lands features freshwater, brackish, and tidal wetlands surrounded by agricultural fields. Add seasonally flooded hardwoods and intensively managed wetlands and you get teal, wood ducks, gadwalls, and pintails. Hunting is by draw on state land and on a first-come basis on the national wildlife refuge.