The rifles of a single, epic season are all variations on the classic, versatile, well-traveled .30-caliber 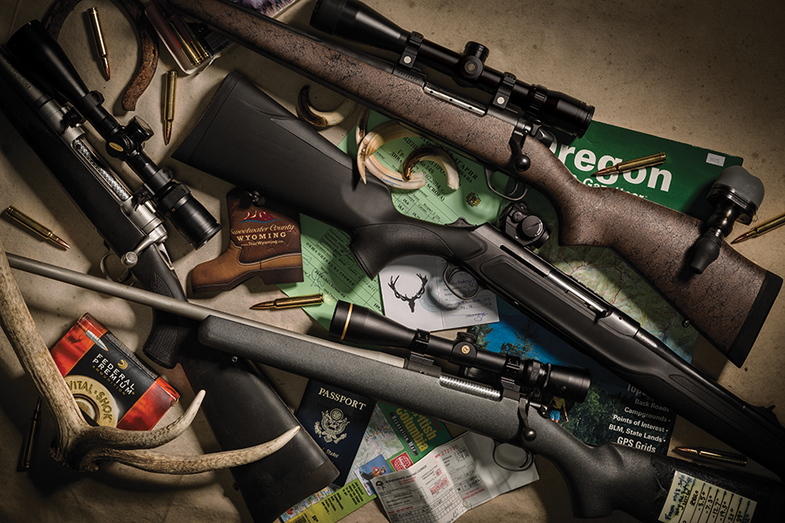 The author’s rifles, and items collected from hunts in three different nations. Photographs by Jeff Wilson

Fistfights have been started over lesser claims: that a .30-caliber centerfire can capably kill every species of big game in the Northern Hemisphere.

Fans of the .338 will make their case for big bear and moose, just as the .284 crowd can capably argue its merits for antelope and deer. But a .30 chambered in strong, modern actions and shipping premium bullets can handle all those critters. Last year, as my calendar filled with big-game hunts across three countries, I decided to test the thesis that the .30 is our most versatile caliber.

This John Day River hunt tested both ends of the effective range of a .30. With a single shot, I killed a 5×5 bull at 43 yards as he pushed a herd of cows right to me. Later, while predator calling, a coyote hung up at 593 yards. I had tons of confidence in the flat-shooting Weatherby, and I dropped him in his tracks. It stands as my longest confirmed coyote kill. Weatherby loads range from 130-grain Barnes TSX to 200-grain Nosler Partitions, making this a great all-around caliber—if you can tolerate the recoil.

For rams above timberline, I wanted a lightweight rifle that could handle the rigors of horse scabbards and the dings that come with every backcountry hunt. I settled on the 5 ½-pound Forbes, and opted to field-test one of the company’s first left-hand models. A short-action version would have shaved ounces, but I have decades of experience with .30/06 ballistics, and confidence in the terminal performance of Federal’s Trophy Copper bullet. It all came together with a 300-yard shot at 11,000 feet above sea level.

For this horseback hunt in northern British Columbia, I needed an all-weather rifle chambered in a caliber that could reach out for long shots at mountain caribou as well as shoot heavy-for-caliber bullets to put down a grizzly bear. The stainless-and-synthetic Savage is a capable backcountry workhorse. Turns out the only performance I had to measure the bullets on was a 1,200-pound bull moose, which fell to two 200-grain slugs delivered from 120 yards that hit inches apart. The bull took one unstable step and then fell dead.

For a driven hunt in cover, you want a rifle that points instinctively and shoots quickly, and the semi-auto Sauer topped with Aimpoint’s Micro H-1 red-dot sight is a spot-on combination. The rifle swings and points like a shotgun, and the fast-cycling, low-­recoiling .308 makes follow-up shots quick and effective. I took this boar—it qualifies for the European record book—at 65 yards as he ran between patches of cover. The bonded Oryx bullet has been a mainstay in Europe and is gaining popularity in the U.S.